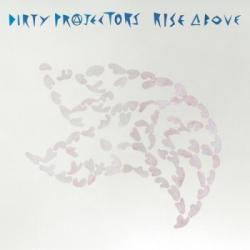 On paper, the concept behind this disc is a fairly intriguing one: pay tribute to one of punk’s most influential albums – in this case, Black Flag’s seminal full-length Damaged – by trying to recreate it using your memory as your only guide.

In practice, though, the Dirty Projectors’ version is a mystifying experiment, one that seeks to emasculate the grinding punk rock of the original with an arch, evasive pop sound that seems to shelter itself under a thick coat of gloss and artifice. The martial rhythms of the original “Gimme Gimme Gimme” are eschewed for a clattering beat over which a spiral of singers, both male and female, render the lyrics as a Danielson Famile-esque sing-along; “Six Pack” is turned into warbling ‘70s progressive rock (precisely the music that Messrs. Ginn, Dukowski, Stevenson, and Rollins were rebelling against in the first place).

Call it the Red House Painters effect. After hearing Mark Kozelek turn a dozen or more AC/DC songs into funereal folk pleas, far too many artists are taking it upon themselves to “pay honor” to their forebears by rendering their versions virtually unidentifiable from the originals. They are not cover songs; they are carpet bomb songs.