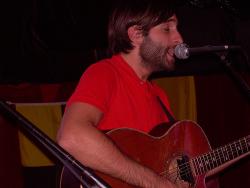 In Sweden, being in a rock band is a pretty sweet gig. Rather than toiling away at some crappy day job, the Swedish government subsidizes artists. Their government subsidizes rock bands and performance artists; ours supports Halliburton and Walmart. I cannot fathom any other reason for the Swedes exceptionalism in pop music (which is a common theme on the Imaginary Blog on a nearly weekly basis).

Yet, prior to last Saturday evening, I was not a complete convert. Sure, I loved Swedish rock bands like the Hives and Sahara Hotnights, but when it came to pop as a national export, I tend to favor Norway – led primarily by Annie and the Royksopp. But no matter; that’s not the point. The point is Sweden. Actually, scratch that, the point of this review is the Shout Out Louds, who happen to come from Sweden.

The Shout Out Louds are a five-piece pop band from Stockholm. Their sound is reminiscent of the earlier gothic pop/rock bands like the Cure and the Smiths (last week I celebrated She Wants Revenge for bringing their most obvious influence, Joy Division, to mind by naming a song “Tear You Apart,” here the Shout Out Louds played one of their newer songs called “Meat is Murder”). They are touring in support of their most recent LP, Our Ill Wills, which was just given a US release on Merge Records. Saturday night they brought their brand of earnest indie rock to a crowded Chop Suey. Unlike most of Ill Wills, the key word to describe their set from “earnest indie rock” is “rock."

Taking the stage just before 11pm and finishing at almost exactly midnight, the Shout Out Louds delivered an energetic and rockin’ set. Playing most of the songs off of Our Ill Wills (8 of the 12 songs) plus a few other favorites (“Please Please Please,” “Shut Your Eyes,” “Hard Rain,” and “Very Loud,” amongst others) the band sounded terrific before an appreciative crowd. Despite losing the rhythm guitar during the first song, the set went off with barely another hitch.

The band’s name is somewhat ironic because they favor melody over shouting, but when the band was on stage, they seemed to increase the tempo of their songs (or at least that’s how I remember it), nearly masking the melancholy and depression that is so overt on Our Ill Wills. It was a Saturday night and the upbeat opening bands (Nico Vega and fellow Swedish rockers Johnassi) set the mood for rocking and dancing (within the limited confines of the floor).

For about 65 minutes, the Shout Out Louds mesmerized an appreciative audience – with some fans holding on to every word that came from singer/guitarist Adam Olenius’s mouth. Really, who could ask for anything more? Well, besides some help from the government in finding a more rewarding day job.