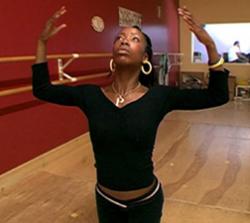 Celebrity photog David LaChapelle's images are famous for their saturated colors and bubblegum expression of pop culture, and so one would imagine his first film being all gloss and surface. While it definitely features some familiar scenes of glistening sweat and deep blue skies, Rize breaks the admittedly beautiful facade and goes deep into its subject. Which is krump and clown dancing.

These two new styles of dance were created in the roughest neighborhoods of L.A., and can best be described as pure expression put into rapid motion — so rapid that the film opens with a caveat that none of the shots have been sped up. These people are really that fast. As LaChapelle traces the various progenitors and their stories — most notably Tommy the Clown, Dragon, and Lil C — we see these new dances not as a fad, but the results of a new movement.

Many possible origins are discussed, including tribal dances, church, and the harsh reality of South Central. Of course, there is no one cause, and LaChapelle wisely moves on to the real story, which is the community around the dances. There's incredible dance footage, certainly, but the film's heart is in the interviews. By the end you're genuinely convinced these clowners and krumpers are serious performers. Even if it is hard at times to take a clown seriously as he sells you on the new mobilizing force in urban L.A.

To put it simply: this is a thoroughly enjoyable documentary. The "Battlezone V" showdown between the two camps is more suspenseful and thrilling than any sports film I've seen in the last few years (yes, I'm including that Spelling Bee doc). Krumping may never catch on, or it may become the next ubiquitous dance style — either way, Rize stands as a fascinating document of optimism in the inner city and as a celebration of DIY expression.