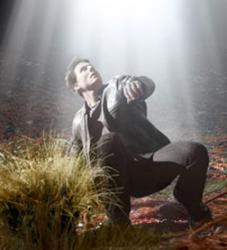 War of the Worlds

"I'm not gonna be exterminated."

Sometimes I wish I were Steven Spielberg. He can make a film that steals shamelessly, even shamefully, from his existing movies — characters, plots, practically shot-for-shot scenes even — and then tack on a cheap and shabby ending, and still make a film that runs creative circles around other horror films. Which isn't to say that War of the Worlds is a great movie; it isn't. It's a good, enjoyable, weekend popcorn-muncher of a fright-fest that's darn scary in parts and satisfyingly sappy in others. It occasionally veers off into ludicrous territory and has brief moments of brilliance, but on balance, it's a good fun flick.

The plot hews reasonably closely to H.G. Wells' 1898 novel of the same title, with a devoutly Spielbergian dollop of family drama. Like a Mirror Mirror version of the Noble Single Mothers from E.T. and Close Encounters of the Third Kind, Ray Ferrier (played, as well you know, by Tom Cruise) is a not-even-remotely noble father who only sees his teenage son and 'tween daughter when their mother and stepfather take an occasional weekend vacation. He's the kind of dad who only has condiments in the fridge, and who hopes that a game of catch will make his son Robbie (Justin Chatwin) respect him enough to do his homework without arguing. Which, of course, only alienates him further. No pun intended.

Spielberg sets this all up quickly and succinctly so he can get on to the aliens. As soon as Robbie runs off with Ray's car to show him he can't be pushed around, a mysterious and violent storm sweeps through New Jersey, killing just about everything mechanical including all electricity, cars, and even, in a nice chilling touch, analog watches. Robbie returns home mercifully soon, but Ray promptly abandons him and his sister Rachel (Dakota Fanning) to go investigate. Ray finds his way to a place the lightning appears to have struck just in time to watch the pavement of an entire intersection and a chunk of a corner church unscrew (tell me that's not a cool effect) to release a titanic tripod robot that is apparently bent coolly and effectively on disintegrating all human life.

Much fleeing ensues. Ray races back to collect his children and run, as fast as he can, but despite his Tom Cruisian scrappy heroics, it's clear that the best he can hope to do is stay a step or two ahead of both the robots and the terrified masses. The film keeps up a relentless rhythm of flight and suspenseful respite as the Ferrier family make their beleaguered way from New Jersey to Boston in the odd hope that they'll find Ray's ex-wife and… figure something out or something.

I'd kind of prefer not to, but I feel it's my duty to report on Tom Cruise's performance in light of his recent antics. I'm a moviegoer who generally hasn't much trouble discarding a public persona while watching a performance, especially if the actor tends to play characters that don't challenge the public perception too much. I gotta admit, it was tough this time around. Cruise has been so diligent about letting us all know what an awesome dad he is — practically every interview notes how he stops production on a dime for a phone call from his children — that it feels the whole time like he can't wait to get his character to the redemption part, when Ray finally stops being such a prat. His performance screams, "See, see, this guy's a bad dad, not like ME!" On the other hand, the fact that most of us now think he's at least a minor lunatic, and probably a spoiled one at that, kind of works in his favor — Ray's supposed to be a majorly self-absorbed guy, and gee, I can't think of anyone like that. In the end… he's ok. Spielberg would probably have done better with someone else, but eh. Whaddya gonna do.

The real star of the show is Dakota Fanning. She nails the fine line between the all-knowing modern teen she's becoming and the frightened vulnerable child she still is. Tim Robbins also does a satisfyingly scenery-chewing turn as a nutjob who may or may not be their salvation. (Side note: when did this guy suddenly become a good actor?)

But really the real star of the show, really, is the scary, scary plot. Throughout most of the film I was cursing myself for not dragging my husband along so I'd have a hand to hold. Spielberg, say what you will about the guy, is masterful at generating fear through suspense. He knows not to show the damn shark till the end, and to let the T. Rex take a loooong time, with no music, trying to destroy that jeep. He knows that fleeing a mysterious force is scary, and that having to rely on your own self-control to evade the enemy is even scarier. So what if the alien probe scene is choreographed exactly like the velociraptor scene in Jurassic Park? Scared you the first time, didn't it? And he knows that nothing beats children in jeopardy for twisting that emotional knife, so he graciously saddles Ray with not one, but two headstrong children, so he's constantly having to try and corral both of them in impossibly dangerous, sometimes Sophie's Choice-like situations. And the film openly pokes at more recent fears, peppering the action with images reminiscent of 9/11: dust-covered citizens dazed from the horror they've witnessed, people dangling helplessly from the edge of a drawbridge, planes that have literally fallen from the sky. To his credit, he does this without crossing into exploitation, which is no mean feat, when you think about it. But it makes it that much harder to keep a nice summer-movie ironic distance from the aliens-attack-us story.

Another way the film jacks the suspense is to never reveal any more to us than is revealed to Ray. It's a clever device, and for much of the film it works really well. Where IS everyone? Wait, where did all these people come from? Why are the lights on here, but not there? What are these things after? Why do they kill some people one at a time, and seem to spare others? What's that red stuff? How much of the world has been taken already? But (and I hate that I'm putting this in pixels) I think that on balance, Spielberg withheld too much. The only way to understand what the aliens are doing and how the conclusion works is to be at least marginally familiar with the original Wells story (or any of its successive film or radio offshoots). Otherwise a lot of what happens can't really make enough sense to be satisfying. (Go here for a little summary so I don't spoil it for you.) And the dainty little bow that Spielberg ties around his family drama at the very end is egregiously, laughably absurd. But I recommend suspending a smidge of disbelief and maybe just leaving a little early because the rest is a good, fun, scary ride.