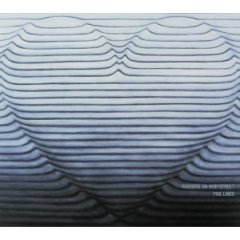 The Pixies are godheads — a nearly perfect institution occupying that sliver of music history between post-punk and pre-grunge. And since their recent visit to the Pacific Northwest, I've been thinking about the qualities that define The Perfect Band. Useless exercise? Waste of time? Sorry excuse designed to showcase another favorite band? Yes, yes, and yes. In any case, this band would have The Pixies' razor-sharp hooks, Lou Reed's vocal swagger, and the immediacy and familiarity of a 60s garage band. That band? You guessed it: Spoon.

In fact, when I heard Spoon's first release in 1996, I remember raising an eyebrow (and a nose) because they seemed to be following too closely in the footsteps of The Pixies. But "Telephono" was (is) so damn brilliant it is a grave injustice to call it derivative. A few releases and labels later, Spoon put out their masterpiece "Girls Can Tell," easily the best album of 2001 and one of the greatest in modern music history.

distinctive vocals and deliberate guitars (he actually appreciates the silence between notes), Spoon has an amazing ability to create captivating musical landscapes by stripping down musical hooks to their very essence and playing them against each other. Britt Daniel'sJim Eno's easy drum rhythms, and Josh Zarbo's bass are all up front in the mix, but the result of each contributor is more comp than lead. Rather than fight for center stage, each instrument and voice listens to and plays off the other. We hear it in how solid and cohesive Spoon sounds without getting too loose or too tight.

A slew of guest musicians and a variety of more subtle instrumentation and effects enable "Girls Can Tell" to become more engrossing with every listen. There is also something familiar and comforting about Spoon's retro-sounding vibes on "Everything Hits at Once" and mellotron on "1020 AM". All of this makes the album listenable while never compromising what is unique about the band.

Like the Pixies more than a decade ago, Spoon is influencing a new generation of independent bands, and many will simply rob what they think works for Spoon. It will be interesting to see which bands take their sound to another level. But most of these hacks will fade into obscurity where they belong.