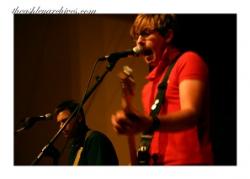 We felt incredibly honored to judge the Cutest Band in Seattle contest for the second year running. Not only were we treated to performances by four great bands {Farewell Addison, Mechanical Dolls, Pomeranian, and the Senate Arcade, as well as a performance by the 2003 Cutest Band Ambitious Career Woman}, but we also had the good fortune to be judging alongside such a fine panel of judges: the wonderful Megan Seling {from the Stranger}, the dashing Pete Greenberg {from the Crocodile}, and another judge merely identified as Katherine, "a teenager." Everyone's favorite local drag queens {except for Kathleen Wilson} Emma Gawd and Anna Rexia did the honors of hosting the shindig.

Our only complaint? Judging this contest was hard because everyone was so darn cute! But enough whining…

The Cutest Band in Seattle 2004: Farewell Addison! Though technically not from Seattle but from picturesque Mt. Vernon, Farewell Addision won the judge's hearts, eyes, and ears with a beguiling pop-rock goodness equal parts Rhodes piano, pitter-pattering rhythms, and disarming yet rocking guitars. Their sound was obviously reminescent of fellow-Skagit Valley Rhode-ites The Pale, which by the transitive power of indie-rock makes them likewise akin to Death Cab for Cutie, quite possibly the cutest band to exist this millenia.

I must confess I was distracted from their overt cuteness by their shit-hottest Vox/Rhodes gear. Sweet Jesus, it was nice! Were these guys sponsored by Guitar Center {or more likely, Hugo Helmer Music}…?

I think they were the only band that blushed during the Q&A session with the judges. This could be because igDana asked them how they would handle the pressure of older women {and men} hitting on them, should they be chosen as the Cutest Band in Seattle. And there's nothing cuter than blushing indie-rockers…

{PS ~ Bonus! We reviewed Farewell Addison's debut EP "A Summer Like This" was reviewed in Astropop February 2004…}

Pomeranian — YOW! They opened the night with a cutest cacaphony of Cowbells! Inflatable chick and bunny toys! Clanging keyboards! Musical Chinese Firedrills! Yelps and screams!!! Blammo! Truth be told, I thought Pomerian deserved to win. It could be my affinity for They Might Be Giants and bands that make use of wacky time changes mid-stream, but it must be said that I thought Pomeranian were cuter than Pocky, pink peeps, and, well, Pomeranians, combined.

I must concur. I haven't had that much fun keeping track of erratic instrumentation and vocals since I saw Menomena last fall. Pomeranian might not have won the title of cutest band, but they're certainly a band to be followed, seen, and heard.

The award for cutest gender-bending goes to Mechanical Dolls, a trio of teenage girls who entered the event dressed as boys, cat-calling and "how-you-doin'" the female judges in a cutely convincing manner. Dressed in boy-drag and faux-'staches, they carried their boy schtick through sound check, when guitarist Savannah Doll came out in boys boxer briefs. After checking her guitar, she then grabbed the mic and proclaimed, "Check! Check! Check!… {a strategic moving of the guitar and then…} Check it out — no package!" I nearly spewed my I-swear-non-spiked-Hub-approved Diet Coke out my nose. Is carbonation in the nasal passages ever cute?

Mere seconds later, a presto-chango backstage resulted in three girly-girls taking the stage, dressed in skirts, full-on makeup, and bare feet. Their music showed obvious nods to the saucy-meets-badass Donnas/Runaways sound, with the raw prowess of a budding L7.

Give these Dolls a few years; with their straight-forward rockin' chords and Valerie Doll's full-on catacylsmic assault on her drumkit, Mechanical Dolls show the makings of an arena rock supergirl band. I'm not sure Valerie's devilish licking of her drumsticks was "cute" per se, but I am sure fellow-judge Pete found it decidedly unsettling. And that was totally cute.

It's no surprise that I think the Senate Arcade are hot. Because they are. In my humble opionion, they're too hot to be cute. For the competition, frontman Todd Schlosser donned a {very tight} Hello Kitty tanktop that showed off his tattooed arms and his belly button. That was cute. But they got a bit… er, "schloshed" {tee hee} before the show which was evident by the loose lips {"Now I don't need to go home and check out my 'Barely 18' magazine," quipped Todd, regarding his competition, Mechanical Dolls}, the stumbling about, and the {happily unfulfilled} verbal threat to moon the audience. While pedophilia jokes are never cute, the Senate Arcade are quite the hottie-pants band and of course, they rock. Maybe next year we'll judge Seattle's hottest band, and we'd encourage the Senate Arcade to enter.