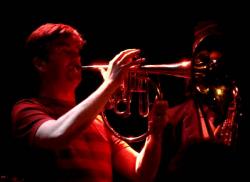 Over at the Yep Roc Records web site, banjoist Rob Carson, absent from this particular gig, recalls the genesis of the latest Rock Plaza Central record, Are We Not Horses:

"One evening Chris [singer/guitarist Chris Eaton] said to me, 'I think the next record is going to be all about robot horses.' 'Robot horses?' I replied. 'Robot horses. In fact, six-legged robot horses. But the problem, of course, is that they think they're real horses.' Blink. Chris went on, 'You remember the war between the angels and the humans from the last record, right?' As a matter of fact, I didn't."

From the perspective of band and audience alike, it would seem that Rock Plaza Central centerpiece Chris Eaton is a subdued, intellectual, Willy-Wonkan tour guide on a flexuous journey through a universe occupied by self-aware equine mechanoids and celestial attendants in body armor. We are helpless observers and participants in the struggle to balance the outre pulchritude and the abysmal darkness of the conflict.

Although Eaton's bandmates may scratch their heads when the topic of the narrative nature in song arises, Canada's indie underdogs showed that they each contribute something wonderful, even if never completely necessary, to make wondrous, densely layered music together. Despite the sometimes dizzying quantity of instruments involved, the songs never felt cluttered. Apart from the vocals, nearly any element could be stripped from the song without changing its nature or impact, but for some inexplicable reason, nothing ever feels like it should be removed.

Sunday's performance by the rag-tag, road-weary troupe of travellers flowed casually like an impromptu show set in a living room rather than a rock club. Several band members were not present, so we were warned early on that it was an unusual performance. The son of one band member (a Berklee student?) joined the group playing saxophone as a one-off gig. Although this may at first appear to be a risky maneuver, the band claims to never rehearse anyway, and showed little concern regarding the threat of a sour note.

As such, the performance was certainly not a demonstration of virtuosic perfection, but the loose, stumbling songs were powerful and haunting, with only a few brief moments bitten by clunky, unrhymed lyrics or musical experimentation gone not quite right. In fact, the songs, when successful, lived and breathed in a nebulous, fantastical dream space. The brief set was split evenly between songs from 2006's brilliant Are We Not Horses and unreleased material, with one song from The World Was Hell To Us thrown in for good measure. The set was strong, dynamic, and full of great melodic and harmonic swells and sweeps with oceanic tension build and release. The band is certainly unconventional, some might say unprofessional, but the beauty, honesty, and vast reach of the songs makes Rock Plaza Central a really special band.

Of the material presented, only "Stereo Trucks," declared by the band to be a "really old song" failed to blend thematically into the remainder of the set. The song's focus on small-town ennui was a little too run-of-the-mill to soar toward the epic heights of the other stories. Remember, we're grappling with the mental mathematics of perspective shifts after the revelation of a purely mechanical existence…when you're a horse who has just fought in a battle between the Heavens and Earth…perhaps on the wrong side.

As the chorus of one new song warned sternly, "don't you believe the words of handsome men!"

"I am an Excellent Steel Horse"