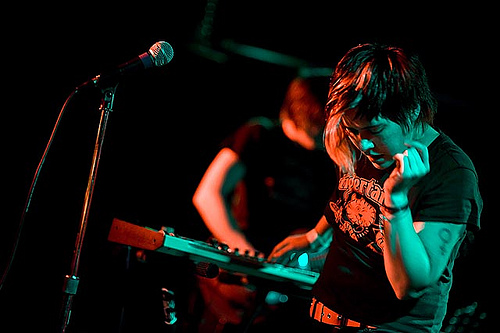 If there's one lady in this city who's earned a Wonder Woman cape, it's Lesli Wood.  For as long as TIG has been around (reminder: 10 years!), Lesli has been a part of Seattle's most noteworthy bands.

I remember the first time we saw her in action.  It was with Saeta at the Sit and Spin in 2002. It was a completely dark room, with Saeta's sublime, flowing songs filling the space.  Lesli lit up the stage with her beautiful vocals and heart-wrenching piano melodies… and her imaginary fanclub was formed.

Since then she's lead the way in Seattle's music scene with not one, but two more amazing bands: Ms. Led (r.i.p.) and The Redwood Plan (currently ruling the streets).  She was even a mentor on an episode of MTV's "Made" (in which she illustrated *extreme* pose, compassion, and patience).  And while doing all this, she's been a practicing attorney. The lady totally deserves a superhero cape!

If you heart Lesli as much as we do (which we *know* you do), mark your calendar for the next Redwood Plan show on Friday, June 8th at The Crocodile with Seapony, Land of Pines and Young Evils for the Noise for the Needy Benefit.

We heart Lesli for so many reasons. She's talented, kind and she's been gracious enough to take part in many an imaginary party (and rocked them all). Remember her performance of "Divorce Song" at our Exile In {Imaginary} Girlville Liz Phair cover night back in 2008 (video below)?!