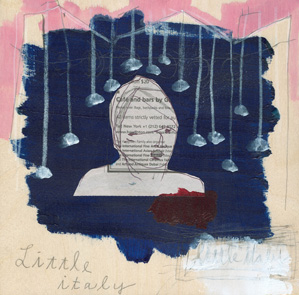 First Thursday always marks an exciting night as the town is taken over with art openings and art vendor sales to and fro, and this Thursday a particularly exciting artist will take center stage at VAIN.

Paintings by John Atkins (764-Hero and The Can't See) will be featured at our favorite hair salon /art gallery for the entire month of November.

For his show at VAIN, Atkins has produced a series of paintings and mixed media on wood in which he has attempted to capture the feeling of loud music late at night with the windows rolled down. "The "works" tend to begin in a stream of consciousness manner with meaning sometimes revealing itself later," says the professed proud southpaw, "but I screen meaning's calls so if it doesn't leave a message I may never know why I did a particular thing. Same goes for music."

The opening reception for John Atkins' show will be held at VAIN's 1st Ave location on Thursday, November 1st from 6 to 10 p.m. Art on display through November 30.