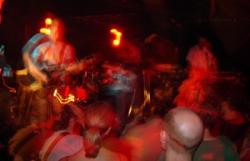 From the outside, and to a girl used to checking the Lusty Lady marquee before entering the Showbox, Chicago's Empty Bottle doesn't look like much. There is a worn PBR sign above the door (it's been there from uncool to back again), and a Laundromat across the street. In my post-show haze, I look through the windows and imagine a little bear in green coveralls, looking for his lost button.

Inside, however, there is just enough seed and smoke, as studded with two pinball machines, a pool table, and a bartender with sideburns and a fish sweater. There is a cat with "mouse" tattooed inside his ear ("We didn't do it!" the doorman quickly claims), and several stair-chairs full of greasy-hair/big-glasses types. The floorboards are just creaky enough for calf-reverb, and once, a woman offered me vodka in the bathroom. All told, it's one of the best venues in Chi-town.

Dan and I arrive ten minutes early, stomachs full of falafel and the sort of pride that comes from being excited about all three bands on a bill because, well, you're just that hardcore (and Sub Pop's recent issues are just that good).

Chad VanGaalen, a former busker fresh from Alberta streetcorners, made the first cannonball splash. Infiniheart, his Sub Pop debut is full of loveliness and exquisite corpses, Rube Goldberg style. VanGaalen is tall in that Jacob's Ladder sort of way; if his voice was a shape, it would be boxes in light colors, floating around the room and bumping gently into lovers' heads. As accompanied by Broken Ankles bandmate Eric Hamelin, VanGaalen sings about your mom's hair and people plugged into machines, all in an edged moan and mostly in that smile-cracking way that becomes a man new to this game. When he finishes, we clap hard. So do three members of Rogue Wave, who have been watching from the back of the crowd. "We wouldn't be anywhere else," says bassist Evan Farrell. "He's damn good."

To be honest, I'd yet to be hooked on the Fruit Bats. They seemed too sweet, too soft: just another group of guys with valentine songs and librarian sweaters. And although Eric Johnson is copping Cuomo's glasses, I was sold from the minute he whipped out the xylophone ("I think it's a Fisher Price," said Dan), and on through the clever pacekeepers: "We've been around since 2000," he said. "That's before the Atkins Diet, and we still don't know what we're doing."

This, I believe, is a lie. It is a lie because of the banjo-kick on "Canyon Girl," the way everyone's face squeezes shut during the harmony on "Rainbow Sign," and especially the five minutes Johnson spent re-tuning the keyboard. Throughout the performance, which drew mostly from last year's Mouthfuls, a background laptop went through a somewhat random slideshow of circuitry, Japanese rock gardens, and a pill-shaped hopscotch. The mismatched drum kit — half red sparkle, half diamond-mirrored — Dan's mismatched socks. All in all, the Fruit Bat catalogue has a steady glow, and as much as I dig trapdoors and sudden cliffs in my music, sometimes, consistency is more than enough. You can't exactly curl up to Comets on Fire.

After a randomly beautiful montage on the P.A. ("Barracuda," the Stones, Bowie live) and while the scruf-dude next to us sent "just wait until I get home" text messages to his girlfriend ("He seems like the type," laughed Dan), Rogue Wave took the stage. The mics made tattoo-shadows on their collarbones, "Golden" Graham LeBron was sporting a new cowboy-style 'stache, and Zach Rogue's wedding ring glittered in the orange gels. Farrell, who seems like the kind of guy you could count on in a hurricane, chewed his gum and bobbed his head in that smile-cracking way that becomes a man who will never, ever get tired of this game.

In a hot-shit moment nabbed from label-and-sometimes-bill-mates The Shins, LeBron and Pat Spurgeon swapped instruments. Here were the Paul-and-Art harmonies, the sunny songs and bruising lyrics, Rogue's peppermint-clear tenor, and (as far as I'm concerned) the sort of blind admiration that, to bastardize Emily Dickinson, makes you feel like your head top's gone and strange light is pouring in.

The band is tight and in love with its music and each other; to hear them is to change your mixtape standards forevermore. They played two encores; I clapped hard enough to bruise my wrist. Damn thumbrings.