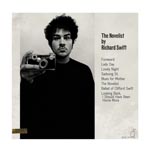 The Novelist / Walking Without Effort

The twenty-seven year old Fullerton, CA-based singer-songwriter Richard Swift played Seattle with the Brian Jonestown Massacre in early September (2005), and I'm sure that many who caught that show will no doubt be buying this exquisite re-release of his first two full-lengths (as a two-disc set) based on the quality of his performance.

The Novelist / Walking Without Effort is attractively packaged in its early 60's style, looking more like a two-disc folkie-era Dylan collection than what the records actually sound like. He has been compared to a lot of artists that have been copying the late 60s singer-songwriters who mix up gentle psychedelic-pop ruminations with Tin Pan Alley sing-a-long styles and almost-lounge style balladry. The closest comparison of this being Pet Sounds Van Dyke Parks-influenced era Brian Wilson, but also including diverse personalities such as Tim Hardin, Tim Buckley, and Phil Ochs.

Producer/collaborator Elijah Thomson describes Swift as an "audiophile archivist" experimenter, referring to the strangely layered effects and melodies on his second album, the luminescent, probably looped through Leslie-speakers The Novelist. It's the first CD I've owned that seems made by a younger artist who probably understands "Single Tape Echo Echo Delay" and thinks about what they would do with variances of rills (the empty groove spaces between vinyl tracks).

Swift admits that his Minnesota farm upbringing was good for him; being by himself doing farm boy things fuels his songwriting. It definitely seems to have an effect on the pacing of his music. It feels like it was composed and performed before records seemed consumed with filling a New York Minute.

Walking Without Effort was his first full-length, recorded in 2001 with collaborators in what I think he suggests was an alien environment— "a studio," as he put it in a recent interview. That studio was the Green Room, run by Chris Colbert in Huntington Beach, CA. Colbert is a prolifically-recording drone-loving savant who, in spite of Swift's essential and eventual mission to record his next release a couple years later mostly by himself on a four-track cassette recorder and computer, gives a warm ambience to the debut.

But the records really are as different as night and day. The Walking disc has a leisurely first half, with no sense of inaccurate expression or subdued turmoil—rather sedate hymns to romanticism (or the romanticism of hymns). The record's "second side" (as Swift likes to list it as its sequence on the cover, broken up like a vinyl record, which he also does with The Novelist) starts with two songs that are less about the bias of hope and more about the ability to be changed by emotion and circumstance. "Mexico (1977)" has a wonderful two-note harmonica hook that leads into Procol Harum-style organ fills at the end of lines like "Every time he hurt you he broke a little more." The return of the two-note harmonica then is devastating, as is the closing gasp of a lyric, "Even though I never knew you—I still call you mine."

Colbert reminds me of Tony Visconti in the way that he sets up acoustically-characteristic "Perfect Scenes" for the stories his artists tell. On Swift's next song, "Losing Sleep," the suddenly-crepuscular feel of the chorus is one of the few urgent moments on the record. "Losing Sleep" has verses that build with a slow sweetness, as Swift coyly confesses, "I wish I could read your mind—I can barely read mine." The combination of stateliness and vulnerability of "Not Wasting Time" ("trying to get through the day—afraid of such a tender thing") dissolves into random studio noise. This sets up for the uplifting "Beautifulheart," an anthem about "things crooked and straight" that both find their places in the afterlife. (It's actually the best Leonard Cohen song that hasn't appeared on his last two records.)

"The Novelist" is a legend, even though its two pressings have only amounted to two and a half thousand copies. It is a decorous and debonair twilight experiment less concerned with the humbly-revered divine subject matter of most of "Walking," and more about the struggle of remaining sane with so much theophanous occurring to the artist.

"I am New York, tired and weak — I try to write a book every time I speak," Swift sings in the chorus, leading to "pull me from my pen — before I fall." Whilst these are not syncretistic ruminations, they have a powerful feel—Swift truly makes his cassette recorder and computer as personal as tools as a writer her pen. Musically, as densely nostalgic for the Golden Years of moon-eyed songwriting much of the material seems, a track like "Lonely Night" can masterfully combine Waits-like grit and "Ballad of a Thin Man" dark surrealism with Beach Boys loveliness.

"The Novelist" rewards repeated listening more than the Green Room collection, but it's wonderful that Secretly Canadian has put the two dissimilar works together for fans to see how Swift has grown from being song-based to being a more abstract, but still catchy neo-Eno of his generation. The fact that both albums unravel like fine stories, with characters and scenes and peaks and valleys on either worthy of experiencing, makes this specially priced assessment of Richard Swift an essential investment for fans of timeless Minnesota farmboy dream-pop.