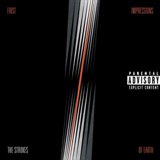 Outside of the world of hip hop and The Ramones, I generally don't care for many musical acts that come from New York City, which is why I'm highly skeptical toward bands like The Bravery, Interpol, and any other band from NYC that happens to be the hipster chic artist du jour. Maybe it's because I prefer my music with a little Northwest flavoring, or maybe it's because I am a jaded SOB who doesn't easily buy into hype, but New York bands have to be something special to tickle my musical taste buds.

This brings us to The Strokes, a NYC band that has been dubbed everything from "rock revolutionaries" to "garage rock saviors." At the time of The Strokes' first release, Is This It? bands like The White Stripes, The Vines and The Hives were raising a garage rock revival with a sound that favored dirty guitars and cranked up amps. Singer Julian Casablancas crooned his way through a fairly solid 11-track debut highlighted by nifty guitar work by Nick Valensi and Albert Hammond Jr. that showed plenty of potential.

By the time the band's second album hit, 2003's Room On Fire, The Strokes were critical darlings. However, it seemed as if they allowed their acclaim to interfere with their music because the record came off as a near carbon-copy of their previous album. While the press continued to wave the flag of The Strokes high atop the summit of Mt. Hype, I wasn't sold.

This brings us to the band's third release, First Impressions of Earth, a record that has been anticipated since its lead single, the Tommy Gun-tinged "Juicebox," leaked onto radio several months ago. On the record The Strokes finally prove they can deliver on the mounds of potential they displayed on their debut, showing they are more than a smoke-and-mirrors band built on a foundation of fuzzy guitars and craftily-crooned vocals.

Multiple songs are carried by Valensi's and Hammond Jr's angular, and at times mind-bogglingly masterful, guitar parts. You'd think that this would get boring after a few tracks, but it doesn't. Somehow the pair mixes it up enough to create a sound that's very un-Strokesy while retaining the The Strokes watermark. If Valensi and Hammond Jr. continue down the path they're forging on First Impressions, they could become the garage rock equivalent of Radiohead's Johnny Greenwood and Ed O'Brien. How's that for hype?

The diversity of song structure shows plenty of growth by a band that could have easily gotten away with releasing a record that sounds similar to its previous pair of LPs. The bridge of "Vision of Division" is an almost wickedly AC/DC interpretation of a Middle Eastern lick that could easily fit on a System of A Down record. The melancholy "Ask Me Anything" strangely fits in perfectly as Casablancas repeatedly sings "I've got nothing to say," and "Fear of Sleep" comes off as soothing as a late night lullaby you'd hear after a hard fought night of bar hopping amongst the hipsters in Capitol Hill.

There are very few flaws on this album. The Strokes seemingly redefined themselves and their sound while at the same time raising the stakes for any copycat hipster group — from NYC or anywhere else. Although First Impressions of Earth is the first major rock record to be released in 2006, it will likely remain one of the best of this year's offerings for a long while.