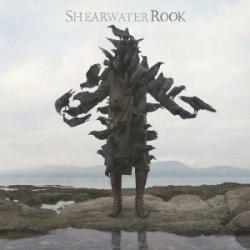 I'm never quite sure if I've had enough of Shearwater. The band delivers truth like a dentist delivers novacaine: despite the absence of pain, the nature of the proceedings is abundantly clear. Shearwater writes deliberate and thoughtful songs that tell of the terrible destruction surrounding us–but do so without scaring us, without the physical pain.

In this modern age of polluted oceans and resource wars, hope and optimism can seem to be endangered species. On Rook, Shearwater takes us gently by the hand, and bids we go witness the ruins of our natural world, rather than sit idly indoors, checking our email and catching up on our favorite blogs.

Rook, Shearwater’s sixth album, the group’s second on Matador Records, is a remarkable work from the Austin-based band. Clocking in at just under 40 minutes and one song shorter than Palo Santo – their critically-acclaimed Matador debut – Rook accomplishes more.

If Palo Santo evoked clouds gathering and forming the perfect storm over a landscape of human-driven global environmental disaster, Rook is a stern reflection on the present aftermath. The album dwells elegaically for long moments on pastoral epochs and then dramatically rings out the relentless and surprising incidents that ensue in the face of nature’s new and unapologetic incarnation.

The album follows a majestic arc setting off with an emotionally vast piece called “On the Death of the Waters.” Lead vocalist Jonathan Meiburg opens, singing plaintively to a solo piano figure that sets a somber, melodic tone. Soon after, Kimberly Burke’s elegant double bass enters and Meiburg reaches to his falsetto to issue a dark warning. "Oh my god/ As the spindle flies apart/ turn your bow to the biggest wave/ but your angel’s on holiday/ and that wave rises slowly/ and breaks" – and with it, the band crashes in with a huge wall of guitars, trumpets, and Thor Harris’ thundering drums – but only for a moment. Having now familiarized us with the gravity of their message, the band restores the song quickly to the quiet contemplation of its solo piano introduction.

Shearwater leverages their second track “Rooks” to intensify their statement. The album’s first single, it takes a more forward yet equally apocalyptic stance. The song begins with bell-tone guitar, a driving bass and drum beat, and piles of crows burning in fields by the side of the road. We are now in a world where even the ambulance driver is hopeless, advising we are best off staying indoors and sleeping until the world of man is paralyzed.

This is scary stuff, but it’s done so beautifully we can’t turn away. Furthermore, we ought to be inclined to listen attentively to such lyrics from a man who studies birds for his living when he’s not playing in the band. Meiburg has his Ph.D. in ornithology and has spent a good deal of time in natural refuges such as the Falkland Islands studying the caracara, a magnificent and ever-rarer bird of prey.

The aptly named “Leviathan, Bound” is a powerful and moving piece that is propelled by an amalgam of percussion, sans drums. The harmonies on this one are beautiful, as are the arrangements of strings, hammer dulcimer, and glockenspiel. Shearwater realizes the race toward ultimate consumption.

“Home Life” is complex, a work in itself that requires many listens to fully appreciate the intricacy of its melodies and changes. The song is an epic journey through the mind’s eye that features guitars, clarinet, strings, tribal beats, piano, and a quite chilling story of human expansion.

“Lost Boys,” a likely ode to Peter Pan, is a dark yet fanciful escape from Rook’s austere realities. Set against a cinematic backdrop of alternating strings and bells, a guitar gently picks while Meiburg sings a nostalgic falsetto. Once we are well-entranced in a world of fantasy, Thor’s thundering drumroll signifies we are near the edge of a precipice, and at once we are again in full flight. The band’s dynamic sensibilities are strong throughout Rook but showcase particularly well here.

“Century Eyes” is the album’s rocker, and ponders television. Shearwater must have known their message might not transmit without a measure of force. “Turn it off! Turn it off!/ With our backs to the arch and the wreck of our kind/ we will stare straight ahead for the rest of our lives!” You will die. Probably soon. This is Shearwater’s way of saying stop staring straight ahead. Wake the f*** up people. Thor’s beat on this tune literally has to be seen to be believed. Like Bruce Springsteen might rock the dystopic future Australia of Mad Max, Shearwater wails on this track.

Calm and beauty returns for a spell as “I Was A Cloud” contemplates the waning relationship between the sky and the sparrow.

“South Col” is the consequent void. The song depicts the absence of song and life through a tense and unsettling arrangement of bowed strings and glockenspiel.

“The Snow Leopard,” the album’s impressive climax, opens with a stately piano figure and spins headlong into a potent chronicle of the life lived by a creature of nature. Piano gives way to wrenching guitar and booming bass, each pushed slightly over the edge of overdrive and writhing over a sturdy marching rock beat. Meanwhile we learn that the very will of nature might be giving up, reaching the threshold of its ability to persist. Will its sullen child summon the strength to survive?

One answer may be heard in Rook’s haunting final track “The Hunter’s Star” which posits “No child at all/ would wake to the light/ of a sun that is reddening/ like a robin’s breast,/ and no lioness/ boards a last, great hull/ on the waves/ that close /on a world/ that will never return again/ and no sound escapes/ from the night to come.”

I don’t prefer or profess to be a doomsayer, but I do think it’s about time someone said something acutely provocative about the present state of our natural world. Shearwater speaks truth to the spoils of man and his crippling of nature.

Thank you, Shearwater. May we hear your next album.