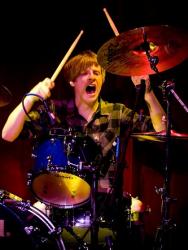 Foals shake the speakers at Neumo's

I had been looking forward to seeing Foals and getting caught up in what I knew would be a great show for a while; however, Neumo’s had slightly different plans for the night. Upon arriving I noticed that everyone was going upstairs the door and not heading directly to the floor. I went to the floor and there was perhaps forty people pressed up against the stage while a DJ spun on the left side of the floor. The club had made the floor underage for the evening. I’m fine with this but this in no way helps the bands. This was exemplified perfectly as openers Panda & Angel played to about maybe fifty people while probably twice that were upstairs not paying any attention.

I’ve seen Panda & Angel twice within the past month and this night they were approaching great — so good that the night after I was still humming “The End Is Not So” as I walked home from the clubs. This set was comparably much better structured than the last time I saw them and the band was very comfortable onstage. They are easily one of the most exciting and potential-filled local bands I’ve seen in a while.

Chicago’s Maps and Atlases are perhaps the most technically gifted set of musicians I have seen gathered on one stage in quite a while and it’s too bad that the floor was still not even close to full. Their brand of Math Rock deftly mixed with jazz chords and insanely intricate and difficult skills to build a house of clutter. Davison’s voice and guitar are unique and incredible as is Hainey’s drumming, which easily causes transfixation. Their music and performance was so intense that it didn't leave much energy to be given to the crowd and most of their performance seems to be more inward leaning.

By the time Foals made it to the stage the drinkers had migrated down and everyone was poised on the balls of their feet for a great performance. They delivered on the final night of their nine-month tour, despite various technical issues, such as Yannis Philippakis breaking strings on consecutive songs, finally declaring his guitar dead, getting another axe and then also repeatedly being shocked by his microphone. In spite of all this, the energy was totally positive and upbeat. Their dance-punk is of the highest caliber and it’s hard not to shake it when it’s right in front of you and indeed much of the crowd was moving right along with Foals.

Philippakis stalked the stage, swinging the speakers over the crowd, walking on the barricade and even made a short trip deep into the crowd to join in with the spirit. They inspired a frenetic fever during their live performance with songs like “Cassius,” “Balloons,” and “Red Socks Pugie,” every song leading to the next and seemingly building on the previous. There was just no break and no rest for anyone.

They went off for a short break then for the encore came out with what they announced as a Slayer song. I can only surmise that it was “Raining Blood” because they didn’t get too far into it. What happened next was one of those “What just happened(?)” moments, as Yannis jumped up on the monitor and swung his guitar neck down to crush the mic stand then pushed over his amp. Next his whipped his guitar off and laid it on the amp and walked off the stage. The rest of the band was obviously confused as well as the song died like when your old cassette player would run out of batteries. Quizzical looks abounded throughout the audience as well as on the stage. I suppose he had had just about enough of being shocked by the mic and just decided to end it. Nothing like a little drama to end an amazing set.

While the show ended on a confusing note it was a night full of wonder. Panda & Angel amazed me and Maps and Atlases were incredible. Foals more than entertained with their breakneck tempos, high-energy antics, and tidal wave of danceable hits.