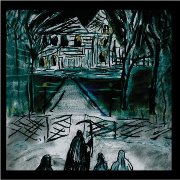 It's your pen pal Joe again. I know I've been bad about writing, but I got a part-time job at the local diner, and I haven't had a lot of time to write. I guess it's been a couple months.

Thank you for this latest record. I don't know if I wrote back after you sent me the last one in August: 29, I think you called it. But I meant to, even if I didn't, and I listened to it a lot. All your letters from the last year have been great — three records in 2005, wow. How did I ever get so lucky as to have a musician like you on my turntable? You're the best pen pal.

And thanks for answering my questions. I know we had that argument where I said I felt like I didn't know you (I didn't mean what I said about your beard, by the way, I was just being irrational), and I know I said I didn't believe you would ever really let me in, but 29 is really sweet. What better way to get to know you then nine songs, each one representing a year of your twenties? Parker won't return my calls…

I was eating leftover apple pie with diner eggs when I heard the mail truck pull up. I rushed to listen to 29 for the first time — I almost tripped on a garden hose when I ran back inside. The first song — the title track — wasn't what I expected. I thought you had gotten the gritty, blues-rock guitar out of your system with "Shakedown on 9th Street" off Heartbreaker, or maybe this was the song about that part of your life. Whatever it was, I like that it has the same gritty growl to it the whole way through; there's something really honest about a song that's almost six minutes long and doesn't really change form, how just good lyrics or a good riff can hold a listener's attention the whole way through.

Like "Strawberry Wine," the next track, or the later "Carolina Rain." The soft acoustic guitars, just the same sweet waltz-swaying love-song beats the whole time — they're like something off Blood on the Tracks.

A couple things I thought were strange, though. The drowning reverb on "Nightbirds," when you sing, "We were supposed to rise above / but we sank into the ocean," was very unexpected. I'm not sure if I liked it or not, but it seemed like something you would do, like the same way RocknRoll was really unexpected; I guess you just do that sometimes.

And what about the transition from piano to guitars on "Elizabeth, You Were Born to Play that Part"? It sounds odd — the meter is off. I can't quite figure it out, but the first time I heard it, I'll admit, I swore it was the best song you've ever written. Is it true that it's about a friend's miscarriage of their already-named baby girl? It's a really beautiful song, Ryan. I wish you would play piano ballads like that more often.

I have to say, I really like 29. I like that it's nine songs all about your life, in long stories and whatnot. I still think Cold Roses was the best record you did in 2005. It just felt more complete, like you knew what you wanted to do when you started it. Or maybe what you mean to do is not mean to do anything? Can it be that you are just this talented of a songwriter naturally? Do you even have to try? A song like "Starlite Diner" has such honest and earthy lyrics, it seems like you could have just sat down at a bar piano and improvised the whole thing out of thin, smoky night air.

Thanks for everything, I'll see you next time you're in town.