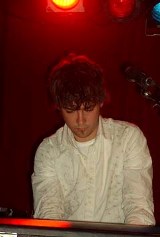 Sadly at times, while at shows I sometimes get caught up in conversations and forget to pay attention to the band playing on stage. I found myself in a similar situation at the Mercir CD release show. I was primarily there to see and support Mercir. I was quite comfortable sitting in those lounge-y wonderful black {at least I think they're black, but everything is black in a dark smoky bar} couches at Chop Suey, sipping on my imaGINary drink and chatting away. The couch and I were really getting to know each other and were getting along famously. Then the opening band, Saba, started playing. After 10 minutes of neck craning and futile attempts to see the stage without compromising my leisurely position, I finally gave up and realized that the one time I actually wanted the opening band to suck, they didn't and I got my lazy ass up and watched the band.

Saba is a tantalizing multi-gender quintet. The two female vocalists give the songs a layered Frou Frou feel. At times they sounded like a downtempo Jem. They definitely get 10 imaginary points for onstage dancing and 20 bonus points for getting the crowd to dance. And there was a crowd. It was the largest crowd I've seen on a school night since the tig first anniversary party. {/shameless imaginary plug}

And a note of warning… don't google Saba. You'll come up with this band that sounds more like Amy Grant than Massive Attack. This is the Saba you're looking for.

{sidenote to semi-formed bands out there: google potential band names before you adopt them to make sure there isn't a band two states south with the same name… especially if you don't like Amy Grant. Wait, does anyone still like Amy Grant?}

To continue a bit on my band name rant, Mercir is one of those bands that people always seem to mispronounce. My goal is to correct you early on in the review, so while you're reading it in your head {or outloud if you prefer} that you pronounce it correctly and by the magic of repetition you will remember it forever… that's right, forever.

It's pronounced {and this is prominently displayed on Mercir's website if anyone feels the need to challenge me} mer'-ser. It's like the street in Seattle, people. Yes, it's spelled differently, but it's pronounced the same. It's not mers-ear'. You're not French and neither is the band. Although Joel, the keyboard player, looks a bit like Paul Rudd. But Paul Rudd is from Kansas… which is definitely not France.

I was introduced to Mercir back in December when I was generously handed their EP. "You Won't Walk Alone" {herein referred to as "Track Three"} became my favorite track. In fact, even though it now lives on track seven on the newly released As Small as the Center, I still refer to it as Track Three. Regrettably, screaming "play Track Three! Track THREE!" at a Mercir show now that their new album is out won't get you the song you want to hear. Luckily they played it anyway.

Mercir sounds like Her Space Holiday on Prozac with a thin layer of the Postal Service and a titch of Bjork minus Bjork {does that make sense?}. The lyrics are a bit strained and at times desperate and longing, but the beats and samples are layered and warm. It leaves me feeling a little strange and confused, but no matter how hard I try, I can never leave Track Three.