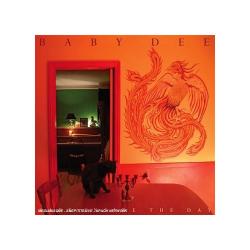 Safe Inside the Day

I suppose it comes as no real surprise that Baby Dee reminds people of some sort of hybrid of Antony & the Johnson and Tom Waits. Not only is she a frequent performer in lower Manhattan, but she also straddles the lines of traditional sexuality, spending time as a transgender street performer, circus attraction (a “bilateral hermaphrodite” on Coney Island according to Allmusic), and the occasional high-rise tricycle harpist. Of course, who hasn’t occasionally dabbled in such ventures (no, I kid), but what Baby Dee’s latest album, Safe Inside the Day, delivers is an excellent collection of highly theatrical and poetic songs.

Baby Dee is very much a descendent of vaudeville, constructing songs that would probably feel more at home being performed in the early 20th century theatres of New York than in a modern-day rock 'n' roll club. “The Earlie King” and “Dance of Diminished Possibilities” are perfect examples of this, songs that take the sound of the Decemberists and the Starlight Mints and ratchet it up several notches to create dark and sinister numbers that are playful at the same time, much like Tim Burton set to music. These are moments when Baby Dee works best, where the vocals, instrumentation and theatrical feel all meld together with ease. “Teeth are the Only Bones that Show” is straight out of the Tom Waits/Randy Newman playbook, with stomping pianos and vocals sounding like they were delivered by a Broadway player on crack.

Unlike some of the more strongly melodramatic songs that demand attention, one could argue that where Baby Dee excels are the tender ballads, like the title track that sounds like something out of the Nick Cave oeuvre: passionate and sensitive without being tacky. “A Compass of the Light” is in the same vein, but might betray some of the overblown theatrics that I’m sure Baby Dee tends to fall prey to. “You’ll Find Your Footing” is another fine example of the ballad she likes best, a song that could be by Antony & the Johnsons if Antony was versed in the vaudeville tradition.

Safe Inside the Day is definitely an entertaining listen. There is so much theatrics and passion wrapped up in the album that you could swear that Baby Dee is in the room with you when you’re listening. Unfortunately, there is also a lot that is bogged down in the dark-alley atmosphere, creating lifeless and tiresome dirges rather that captivating bits of underworld pageantry. That being said, you’d be hard pressed to find a performer that is so comfortable in the niche that they could record an album like this and actually make most of it work so well. It might not be everyone’s cup of tea, but I don’t think Baby Dee would want it that way in the first place.