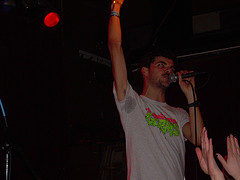 The Teenagers are not, in fact, actual teenagers. Let’s just get that out of the way first because it’s the same question I’ve gotten from every single person I encountered when I told them I was reviewing this show.

They are a trio of smart-ass French hipsters in their early twenties who make sleazy (both sonically and thematically) lo-fi electro dance pop. Their songs are catchy, dance rock gems with tongue planted firmly in cheek. Their debut album, Reality Check, is being released digitally on Tuesday, January 22 (and with the disc available in stores sometime in mid-March).

I had arrived at Neumo’s just before midnight, missing the opening acts and most of the DJs because I was at a dear friend’s birthday party nearby, but the show looked like a hipster dance party. A curtain cut off half of the room, which the crowd filled up, and gave everyone enough room to dance, if they chose to.

When they took the stage, it was anti-climactic, and I don’t think they’d have it any other way. At midnight, with Sam Rousso Sound System spinning a mash-up of New Young Pony Club’s “Ice Cream” and the Brazilian Girls’ “Jique”, the Teenagers appeared on stage, but only to set up their gear. Most people didn’t seem to notice as they were wrapped up in the beats they were dancing to.

About 15 minutes later, the Teenagers appeared and without a word started right in to their current single “Starlett Johansson.” The lineup was different than what you hear on their record. Instead of synths and a drum machine, they filled their sound from two guitarists, a bass, and a live drummer. The second guitarist and drummer were both women, neither said a word while on stage, although the drummer got a few catcalls from the crowd. “We love the drummer girl, too” one of the Teenagers told us. The only electronic touch I noticed was when they sampled female vocals in “Homecoming” from a laptop.

Their set was short (about 40 minutes) but it was energetic and fun. Lead singer Quentin Delafon jumped around the stage for as long as he was on it, but said little in between songs. I guess the lyrics (often sex-obsessed), especially the chorus to “Homecoming” speak for themselves.

When it was time to play “Homecoming”, the first single off of Reality Check, they pulled a young woman out of the crowd to sing the female parts of the chorus, but mostly they were looped back from the recording. The song is a he said/she said tale of a hookup with a ditzy blonde cheerleader and an English hipster. The verses are spoken (like Nada Surf’s first hit “Popular”) and the chorus (which is completely NSFW – a warning I forgot to give earlier in the week) are sung. It was somewhat awkward hearing the live vocals and instrumentation played with other parts that should be sung were actually looped from Memorex, but the only other option was not playing that song altogether, which, of course, really wasn’t an option.

The set ended just before 1 am with an interesting choice, I believe it was “End of the Road” which also closes the album (but it’s the only song on the setlist I’m not sure of).  It was a power ballad, in the tradition of Queen (Delafon joked that it was the Teenagers’ version of the Macarena). It was an unusual choice for a band that mostly makes dance music because it slowed down the tempo of the room considerably.

After the set and a hearty round of applause, the band left the stage the same way they came out: with little fanfare. They gathered their gear and went back to the green room, leaving one with impression (pretty much confirmed by Delafon’s recent interview with new Stranger music editor Eric Grandy – who was spinning records before and after the Teenagers played) that the band members are unassuming and their songs reflect a childish persona different from their actual personalities. I thought their stage antics would be much louder and more obnoxious than they actually were. If you didn’t know that this was their first American show going in you wouldn’t have known leaving. Still, they were enormously entertaining and fun to see perform. Moreover, people came out to dance, not to see some new band try to take America by storm and that made all the difference. It was a fun set to a promising band. People sang along and danced and everyone seemed to have a great time. What more could you ask for?