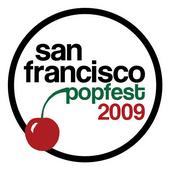 We were lucky enough to have THREE of our own imaginaries there! Myself, Steve Louie (who provided all the photos), and imaginary liz all made the trek South for memorial day weekend! Here's our thoughts on the first night, which in order was Swedish indie pop songwriter Pelle Carlberg, Austin's Oh No! Oh My!, San Fran's own Still Flyin, and Sweden's indie pop dance extroirdinaires Suburban Kids With Biblical Names.

Steve Louie: I arrived maybe half way through Pelle Carlberg's set but I think I caught his best songs. "Go to Hell, Miss Rydell" – a laughable serious song about the press. Guess you gotta be careful that you don't say anything bad about Pelle or he will hunt you down. "Clever Girls Like Clever Boys Much More Than Clever Boys Live Clever Girls" – best song title.

Keenan Dowers: "Clever Girls" was so my theme song… but alas, I arrived just in time to catch the last minute of Pelle's set, after a 13 hour drive and another half an hour to park in Downton SF on a Thursday. As Oh No! Oh My! started, I realized I was not ready to be surrounded by people and see bands yet (after a million miles of driving), and ended up missing their set. Steve, what did you think of them?

SL: Not much to say but they were good, except the part when the lead singer brought out his acoustic guitar and the songs turned more folkish.

KD: As Still Flyin went on, I asked a friend how long they thought it would be until they started, and he said "oh, they're still setting up" (rim shot, please). After hearing the song "Hott Chords" that we podcasted, I was incredibly excited to see this ever growing technically San Francisco based 20+ member pop band. I'd always heard from friends "oh, yeah, they're a reggae band", and I never really believed it, but yeah, they were a reggae band. I have sort of a predisposition against reggae, due to my growing up around hippies, and found myself just a bit disappointed. However, their last few songs (including the afforementioned "Hott Chords") were more ska than reggae, and my friends and I had a dance party in the back of the venue. I'm now looking forward to seeing them again with Love is All on June 8th at Neumo's.

SL: My favourite Still Flyin songs were "Rope Burn" and "The Bird is Aware" – crowd favourites too. The mandatory dancing part of the evening started with these guys. Free style dancing good times.

igLiz: I am so sad to have missed this set (I didn't arrive in San Fran until Friday night) – I can't wait to see them at Neumo's in June and sing along to "Hott Chords" live and in person stylee. You can hear THE song for yourself on our SF Popfest podcast! For the last couple weeks, I've listened to it about five times a day. Whenever the going gets tough… I play "Hott Chords."

KD: I made sure that I got a spot right up front for Suburban Kids With Biblical Names, as they'd impressed me so much the previous week in New York, and again, they didn't disappoint. In fact, I think they were even better. Check out Steve's video for their song "Funeral Face" (and notice the dance party happening!).

SL: SKWBN carried off where Still Flyin' left off with more than enough infectious dancing to go around. The crowd's waited a long time for these swedes to finally play for the first time in the states. Well worth it.

igLiz: I have yet to see SKWBN live but in my mind they are brilliant. Steve's video (of one of my favorite songs no less) proves my suspicion. Thank you so much for filming! Now off to hunt for more videos of the night so I can feel like I was there.

KD: Steve and I both ended up grabbing setlists (though mine was a present for miss imaginary liz who sadly, couldn't be there).

igLiz: Sidenote: Keenan and Steve rule for making up for the fact that I missed this show.

Flash forward to the last night of popfest as everyone was saying goodbye, I was talking with Johan fron SKWBN, and a friend of mine walked up and asked him why they weren't bigger than Vampire Weekend. I wish I knew the answer.

Check out the rest of Steve's photos! And stay tuned for the rest of the weekend's coverage!