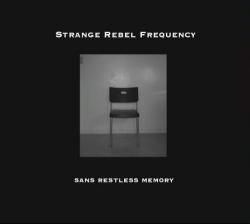 Sans Restless Memory, the second album by Strange Rebel Frequency is primarily an acoustic based assortment of songs that falls somewhere between Johnny Cash and Swans. It is a stark recording that will put you straight into a car on a late evening ride through the arid wastelands of Southern California upon listening.

The Los Angeles based group actually released Sans Restless Memory in 2007, but this disc recently arrived in the mailbox of Three Imaginary Girls and upon hearing these songs, this ‘better late than never’ review was asking to be published. The fifteen tracks on the disc span a range of folk (“Vanalden Days”), roots country (“City Of Angels”), punk (“Wire”) and goth (“Crackle”), but there is a cohesiveness to the record that is held together by the omnipresent strumming of acoustic guitar and the low grumble of singer David M. Cross’s voice.

There are many highlights on Sans Restless Memory thanks to the impressive songwriting, but “Vanalden Days” in particular is a beautiful portrayal of resignation that sits comfortably alongside “Chelsea Hotel #2” by Leonard Cohen. “Crackle” opens up some contrasting territory with grinding electric guitars that are not unlike Swans or early Cranes. Elsewhere, “Ali” is another teary stripped down ballad in the vein of Tom Waits.

As noted previously, this record is already nearly two years old and Strange Rebel Frequency is preparing to release a new album this year titled Our Refining Days. There is no word yet on a release date, but keep a look out for the upcoming CD. Let’s also hope for a West Coast tour. A live show in Seattle later in the year would be greatly anticipated.