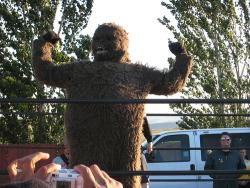 It’s tough to write a synopsis of what watching Incredibly Strange Wrestling (herein referred to as ISW) was like. There isn’t an album on iTunes that I can direct you to to gather a gist of the live performance. There isn’t a group that I’ve seen previously that I can compare them to. They are, as their name suggests, incredibly strange. Thank jeebus I had Sasquatch accomplice Brian with me. While I was ducking for shelter from the flying tortillas (more on that later) and watching open-mouthed in glee and awe, Brian was dubiously snapping pictures and even taking video. I’m hoping this onslaught of multimedia will help you grasp what being in an ISW crowd was like.

It began like a normal wrestling event. The announcer revealed the competitors, their stats, and primed the crowd for each of them to enter the ring. That’s where the pedestrian wrestling event ended and the incredibly strange began. The competitors were a hot dog replete with mustard, an invidious guttling fat bastard type, a hairy beast named “Macho Sasquatcho”, and two brothers in black lycra and wrestling masks. Then there were the tortillas. Tortillas were flung into the air by the referee like frisbees. I always lost that guess-how-many-marbles-are-in-this-jar carnival game, but I would guess there were approximately 112 tortillas thrown in a span of 30 minutes. There were rumors of other flying food products, but I only witnessed tortillas. The audience ate it up—the tortilla throwing, not the actual tortillas—and started diving at tortillas they found on the ground so they could throw them at their least favorite wrestling character.

Sidenote: one of my cohorts commented on how resilient the tortillas were and that they obviously weren’t mission brand (weakest tortillas on earth—but delicious). We even commented that they might not be real tortillas, but were too afraid to bite into one.

In the middle of the event, the ref held up the championship belt for the crowd to see (upside down, I might add) and the man standing in the group next to us reached over the barrier and stole the belt. He paraded around the yelling and cheering crowd for a good 30 seconds. I thought it might be part of the act until I saw the genuinely angry ref confiscate it.

At one moment, Fat Bastard (I forget his real stage name) became angry at the ref and rubbed his beer soaked (at the beginning introductions, he drooled a little bit and it ran onto his bare stomach) belly on the fallen refs face. The announcer (his splendid badinage present throughout) announced “That’s gotta hurt, 500 pounds of passion all over you.”

The final round concluded with quite a theatrical ending. Macho Sasquatcho's challenger came out with injuries (I’m pretty sure they were false—shhh don’t tell anyone) to the mob hissing and booing. This last match incorporated back flips off of the rail and breaking of furniture and crutches (mostly over a contestant’s head). In the end, Macho Sasquatcho took home the belt because, afterall, it was his special weekend.