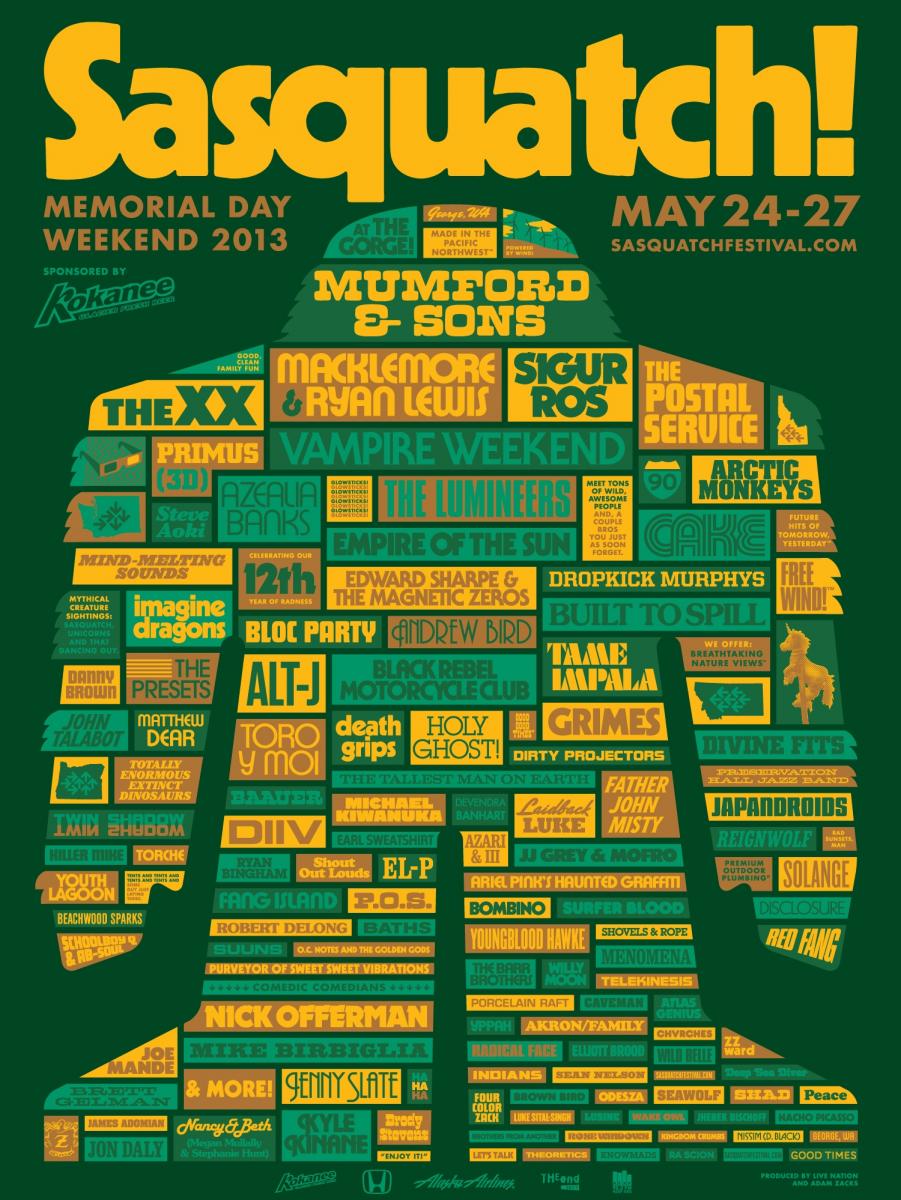 Sasquatch 2013: Your guide to navigating the side stages {Monday, May 27th}

We're giving you the day-by-day for this year's Sasquatch! music festival — check out our recommendations for Friday here, Saturday here, Sunday here, and read on for Monday's picks!

Start Monday off with Nissim at 1:00 on the Cthulhu stage. Nissim is the moniker of Damian Black — who you might know better by his former alias, D. Black, manager and member of Sporting Life Records and accomplished rapper and producer in his own right. Black gave all that up several years ago when he converted to Judaism, got married, and had a son. Recently however, he’s been lured back into making music, although this time around the music is more earnest and uplifting in nature. Follow his set up at the Bigfoot stage at 2:25 for Minneapolis rapper P.O.S., who’s part of the ever-talented Doomtree collective and part of Rhymesayers, the label that brought us Atmosphere and Brother Ali. P.O.S. comes off a little stronger than some rappers, as some sort of hybrid between punk and rap. He’s just as likely to rap over squealing guitar as he is to record scratches and a bass beat. These two back-to-back is sure to wake you up and set a tone for your last day at the Gorge!

Stick around the Bigfoot stage for Cody ChesnuTT’s set at 3:25. Last year saw the release of his second full-length album Landing On A Hundred, the first since his debut in 2002. Fans of southern soul, R&B, funk, and blues will find a lot to like in ChesnuTT’s music, and his live shows are energetic and oozing with passion. Up next is Dirty Projectors at 4:30, led by the dizzying guitar work of the band's founder and guitarist David Longstreth. The really captivating aspect of Dirty Projectors are the vocals of Haley Dekle and especially Amber Coffman, who at times hit some serious Mariah Carey-level high notes. Their 2012 album Swing Lo Magellan may have been their most gorgeous and explorative release to date.

The 6:00 hour brings one of the biggest scheduling conflicts of the whole weekend: on the El Chupacabra Stage is Toro Y Moi, Chaz Bundick’s electronic, R&B project; and on the Yeti stage at 6:05 is Portland duo Menomena {whose fifth full-length album Moms I reviewed back in October}. You really can’t go wrong with either one: Toro Y Moi’s live set will surely have a lot of people bouncing their heads and nodding along to the beat, while Menomena’s always-energetic live show hinges on the energy between Danny Siem’s drumming and Justin Harris’ captivating bass hooks (and occasional crowd pleasing saxophone riffs). Coin toss!

At 8:30 on the Bigfoot stage is Alt-J, a British band who’s had a meteoric rise this past year. Their debut album An Awesome Wave won them the Mercury Prize for best British Album last year, and they sold out their April show at the Neptune Theater in minutes. Their sound is hard to pin down, at times sounding like slower Radiohead experimentations, at others like fellow Mercury nominees Django Django. No matter how you interpret it, they'll be a great closer to an incredible Memorial Day weekend.

Who are you excited to see? Let us know in the comments below!

{Sasquatch takes place at the Gorge Amphitheater in George, Washington from Friday, May 24th through Monday, May 27th.}