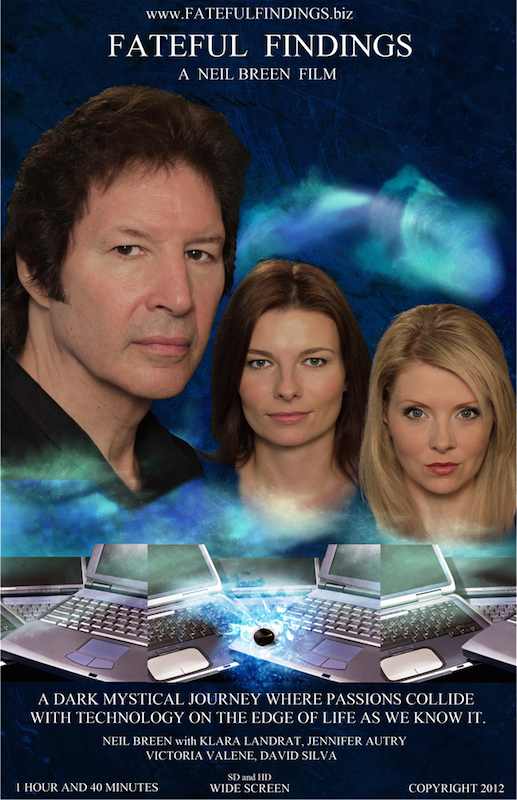 I'm calling it right now, Fateful Findings is going to win SIFF 2013. Regardless of category; best dialog, plot, love story, computer hacking – this film takes the experience to eleven. Admittedly, for some that might be to negative eleven. But in the bad movie olympics, Fateful Findings sticks the landing to take the gold, silver and bronze. A hell of a lot of fun to watch by myself, I cannot believe it won't be 10 times more enjoyable at its world premiere midnight screening. I seriously cannot wait for the equally improbable sequel. Take a gander at the trailer – if you're intrigued, RUN to buy a ticket. In a just universe, they'll sell out.

On one hand Fateful Findings is an absolute masterpiece of "can't look away" dysfunction, for which the phrase "hot mess" seems too complimentary. On the other hand, the bizarre and often unexplained vision makes it hugely entertaining – in ways many other bad films such as The Room don't approach. One doesn't need to throw spoons at the screen to enjoy Fateful Findings. Though I suppose a few cocktails or bit of other now legal in Washington substances couldn't hurt. Troll 2, you've now got some serious competition.

The film's poster trumpets it as "a dark mystical journey where passions collide with technology on the edge of life as we know it." Certainly a fair description. Things open with a creepily beautiful time lapse shot of an office building as clouds stream by on a sunny day. The camera cuts quickly to a long, creepy shot of storage lockers. Jumping next to two children walking innocently through a forest. Not even two minutes in, they pass an animated ram's skull that gives the Chaos Reigns fox from Antichrist a run for it's no particular reason appearance money. Without noticing, they continue on their way to discover an enchanted treasure hidden under a disappearing mushroom (seriously). It's "a magical day", the young girl writes in her notebook, while the young boy pockets a smooth black cube. They're in love, but perhaps doomed to be apart for many years, as shortly after returning home her family moves away from his. And the stage is set …

Later in life, a violent accident brings the couple back together. Things have grown considerably more complicated by then. He's living with a drug-addicted girlfriend who loves to pop pills and wash the same dish over and over again. He's also somehow been negatively impacted by that black cube. Clearly aging at twice the rate of the girl he once knew, appearing at least 15 years older than her by the time they meet again. Along the way, he's gained amazingly cheesily-rendered paranormal powers and some super lame best friends. A lot of crazy shit goes down – but I've already revealed too much.

The trailer for the film hints at the significant issues with the writing and acting. In reality, it barely scratches the surface at how off it all is – it's truly terrible. Complexities of plot build on themselves so quickly that it's hard not to imagine there's a 17 hours director's cut somewhere that more clearly explains things. This isn't like The Room, where things are completely out of left field. It's more that the paranormal activity aspects of it are largely peripheral to the relationship and the incomprehensible We Steal Secrets shades of plot. The most mystifying things aren't that he can walk through walls or who the unnamed black clothed spectral people who materialize at will are. What troubled me far more are things like ..

– Who takes a shower with their lover who has just returned from the hospital with bloody streaming head wound and doesn't even ask about the incompetence of whoever put the bandage in place? Or I don't know … why she has a gaping head wound?

– What does Neil Breen's character have against laptop computers? In every office scene he's got around 5 different laptops which he consistently physically abuses. Thrown across the desk, pelted with books, and dumped on the floor —  there's clearly some deep seated aggression at work here.

– The budget for Fateful Findings appears pretty significant. For such an over-the-top production you'd think wardrobe could afford a bra for at least one of the women who appears onscreen? {Ed. note: you're complaining about THIS? Wow. It must be really, really bad. ~Imaginary Amie}

– If you're going to have nudity, why my Lord, why is it entirely limited to Neil Breen's ass? Is that some sort of tribute to Tommy Wiseau?

In all fairness though, the issue with the laptops may actually be explained. Breen's character earns his living as a novelist but is clearly torn about it, preferring to spend his time hacking into corporate and government databases to unearth incriminating proof of corruption and malfeasance. The horror of becoming a writer tortures the man, leading to the best line in the film (which cannot be done justice with the written word), "I have a damn masters degree in computer science … And I turn out to be a writer … Of novels!" Perhaps most impressive is how he's achieved fortune as a writer and skills as a software guy without learning how to type. Or actually know how turn the computers on, from what I can tell.

Hacked secrets have a way of bringing out problems – and that truism does not get an exception in Fateful Findings. Breen is plenty busy fending off the hot daughter of his friends, dealing with a failing relationship, recovering from a coma, and engaging in new (oddly PG) rated affairs. During all this soap-opera drama, things start to get real. All I'll say about that is that if the government ever decides to go after me I'll hope to suddenly develop the same mad skills as Breen. Also, that government goons sent after my loved ones helpfully drop the coordinates as to where they're taking their kidnap victims where I can finding it. Yes … that happens …

Fateful Findings is a true one man show. Neil Breen is the writer, director, producer, editor, production designer, and male lead of the picture. I'm assuming if asked he might also remark that he's also a writer, a doctor, a nuclear physicist and a theoretical philosopher. One can call a film so bad it's good – but to be fair if it's good, then it's good. It matters not at all how it got that way. To me, it's the same as making a big deal about how much money was spent on a picture. I still only pay $11 – so that someone is taking a $200M bath isn't for me to judge. If I like it, my money was well spent. I'm confident fans of non-normative film making will get their money's worth with Fateful Findings. You'll want to be there when it plays SIFF as it's unclear when the opportunity to see this masterwork will present itself again.

{Fateful Findings is having its world premiere at the Seattle International Film Festival on May 25th, 11:55pm, at The Egyptian}