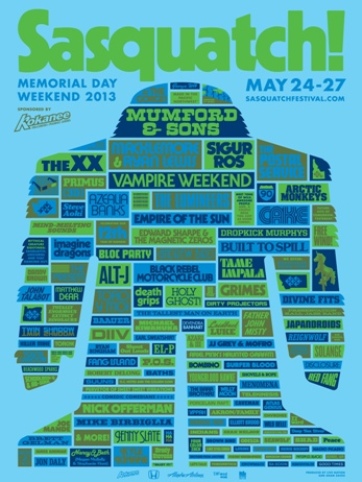 Sasquatch 2013: Your guide to navigating the side stages {Saturday, May 25th}

We're giving you the day-by-day for this year's Sasquatch! music festival — check out our recommendations for Friday here, and read on for Saturday's picks!

Options abound at 1:00 to start off your Saturday: over at the Yeti stage is Seattle’s Rose Windows. The septet recently signed to Sub Pop Records, who will release their debut album The Sun Dogs on June 25th. On the Cthulhu stage, also at 1:00, you'll find Ra Scion. Most will know Ra Scion as the front man for Common Market, the hip-hop duo he formed with producer Sabzi. He’s currently teamed up with Tacoma producer Todd Sykes, and his rhymes are just as potent as ever. Stick around the Cthulhu stage — which is all Puget Sound hip-hop, all four days, by the way — for Tilson XOXO, the current project of the former Saturday Knights front man. He released a fabulous soul infused Jackson Five-inspired song last fall called “Nevereverland” that was featured on Give Seattle 2013, a benefit album for The Vera Project.

Back at the Yeti Stage after that is Indians, the solo project of Danish musician Søren Løkke Juul. He released his debut album Somewhere Else on 4AD this past January. His stripped down electronic sound brings to mind a mellow version of Panda Bear or Porcelain Raft (who also play Saturday, at 7:40 on the Yeti Stage).

Next, head over to the Bigfoot Stage at 4:10 for Michael Kiwanuka. The British singer does a great job of balancing his old soul influences of Marvin Gaye and Bill Withers with more modern R&B {think a gentler D’Angelo-type sound}. His song “Tell Me A Tale” sounds like it could have just as easily been recorded in 1972 as 2012:

As in past years, Sasquatch isn’t just about music — there’s some good comedy to be had too, and with it a good chance to get under the comedy tent and out of the sun for an hour or two. Kyle Kinane is at the El Chupacabra comedy stage at 5:15. His storytelling style and self-defaming persona have made him a fan favorite, as well as an up-and-coming star in the comedy world. Following him on the El Chupacabra stage is Nick Offerman, who most will know as Ron Swanson from NBC’s best comedy ever, Parks & Recreation. Offerman's character on Parks & Rec was somewhat molded after Offerman himself, and even outside of the show it's often hard to tell where Nick Offerman ends and Ron Swanson begins.

At 8:15 the music picks back up on the Bigfoot stage with Divine Fits, which is the collaboration between Spoon frontman Brit Daniel, Wolf Parade and Handsome Furs co-frontman Dan Boeckner, and New Bomb Turks drummer Sam Brown. Fans of those bands will find a lot to like with Divine Fits, as the strengths of each musician are brought simultaneously to the forefront. Stick around the Bigfoot for 10:00 and take in one of the absolute highlights of the entire festival, Australian band Tame Impala. Last year they released an incredible sophomore album titled Lonerism. Front man Kevin Parker’s voice recalls the legendary John Lennon, and the band has a penchant for immersing themselves in psychedelic guitar solos that will probably be even more expansive in a live setting.

Thankfully, Tame Impala’s set ends just in time to catch Sigur Ros on the Main stage at 11:00. I can’t think of a more perfect way to unwind after a long day or great music then to lay on the grass and let Jonsi’s falsetto vocals and his Icelandic bandmates' beautiful orchestral harmonies carry you off into the night.

{Sasquatch takes place at the Gorge Amphitheater in George, Washington from Friday, May 24th through Monday, May 27th.}