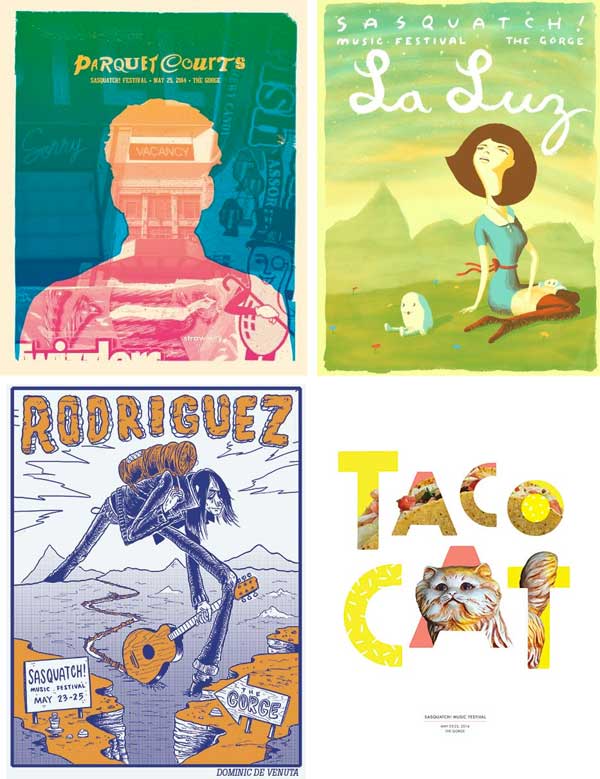 I have to admit, I kind of like the new Sasquatch schedule of Friday-Sunday instead of the old late Friday-Monday. It’s a little less tiring, and you still get the free travel day on Monday so you can stay out late at the party stages guilt free. With that said, onto the final day of Sasquatch 2014!

TacocaT
The biggest (pleasant) surprise for me this weekend was seeing Seattle four-piece Tacocat. Not that I wasn’t’t aware of them before, but mostly that I hadn’t’t experienced them and all their fun pop-punk glory until this afternoon. Joined onstage by a “bubble queen” who kept their bubbles flowing throughout the show via a side stage bubble machine, Tacocat kept things fun and lively on stage. Singer and tambourine extraordinaire Emily Nokes energetically danced and sang her way through songs about getting to second base and the frustrations of being horny while having a UTI. It was actually quit fun and liberating to watch 20+ guys excitedly dance along with the band to the super-catchy “Crimson Wave”, which you may have guessed by the title is about periods. As their set closed, they had the sound person put on the Miley Cyrus hit “Party in the U.S.A..” as they danced along while simultaneously putting their gear away. Drummer Lelah Maupin was having such a good time she had to be pulled off stage by her band members. Basically, Tacocat is just a ton of infectious fun and if you don’t enjoy their show then I don’t want you at my party.

La Luz
Seattle four-piece La Luz followed Tacocat on the small Yeti stage and let their surf-rock sunshine vibes chill the crowd. Towards the end of their set they split their audience down the middle and formed a walkway where they encouraged people to show off their best dance moves “Soul Train” style down the walkway. It worked for a little bit, then about half the crowd tried to join in and it turned back into a mosh of people again. Fans were having a good time regardless of how the short lived soul-train line worked out.

Tune-Yards
One of my most anticipated shows from Sunday was for Tune-Yards who played the main stage touring in support of their recently released third album Nikki Nack. Front woman and founder Merrill Garbus was joined on stage by bassist Nate Brenner, as well as a woman who played a multitude of percussive instruments, and two backup singers and dancers. Tune-Yards live shows are always impressive, as it’s quite a feat to watch Garbus loop together individual drum hits and vocal melodies on top of each other until she has a solid foundation. Tune-Yards songs are a lot about percussion. Pretty much everyone on stage had drumsticks in their hands at some point. The set leaned heavily on the new material, but the biggest crowd reactions seemed to come for W h o k i l l tracks “Gangsta” and “Bizness.” They closed their set with the first single from Nikki Nack “Water Fountain.” All show the beats hit hard, the bass lines were tight, and the dancing was plentiful.

Hannibal Buress
This year’s festival had some great comedian talent, which I just had to check out at some point in-between all the great music. Hannibal Buress has been working the comedy circuits for years now, and it’s really starting to pay off as this set shows he’s working his way up to the upper echelon of top comedians working today. He worked with a DJ behind a turntable who occasionally played some sound bites to augment his stand up. He ended the show with a half dozen ballerinas spinning behind him as he sang his all-too-familiar sounding rap song “gibberish rap”, which is basically him mumbling verses then saying words at the end of each line. I won’t bother trying to retell any of his jokes because we all know that never quite as funny as it sounds. Just go see him or look him up on YouTube if you get the chance.

Rodriguez
Pretty much every adult over the age of 30 seemed to be at this show, but so did a lot of young people, which speaks to the power and reach of Rodriguez’ music, as well as the popularity of the recent Oscar winning documentary chronicling the musician, “Searching for Sugarman.” Although Rodriguez made all of his music when he was in his early 20’s, he’s 71 now, and his age shows when he slowly walks on stage and places himself in front of the MIC. It almost felt like you were watching a sort of living legend, except for the fact that the biggest storyline about Rodriguez is how he essentially missed out on what many fans would say should have been a legendary career. Although Rodriguez has two albums worth of fantastic material to pull from, he filled his set with a number of delightful cover songs. Backed by a full band he played the traditional standard “Love me or leave me”, the Flamingos’ classic “I only have eyes for you”, the Elvis-popularized rocker “Blue suede shoes”, and Frank Sinatra’s “Live till I die.” It was pretty cool hearing some of these classic re-imagined and played with Rodriguez’ smooth voice and gentle guitar strumming. The song the crowd seemed to be waiting for though was “Sugarman”, and he threw it in the middle of his set to much delight.

Parquet Courts
Even though Parquet Courts are a relatively new band, they sounds a bit like a throwback this evening, as their 4 chord extended garage-band jams were reminiscent of the boom of similar bands in the early 2000’s. They played a number of tracks off of their soon to be released sophomore full length Sunbathing Animals. Fans also took the opportunity to start little mosh pits of front to a few of the rowdier tracks.

Queens of the Stone Age
Headlining the final day of Sasquatch 2014 were the rock veterans Queens of the Stone Age. They drifted through classics like “Go with the flow” and “No one knows” while mixing in some of the quality new material off of last year’s release …Like Clockwork. Frontman Josh Homme oozed a certain kind of cool, smoking cigarettes in the middle of songs and crushing guitar solos.

Major Lazer
Diplo’s dance hall project Major Lazer closed out the festival with a giant dance party. On record, Major Lazer is a patchwork mix of reggae, dub, dance hall, techno, and a multitude of party starting dance music. The live show however seems to be significantly different. This show was mostly mash-ups of popular rap and top 40 songs with electro and dance hall beats laid over top of them. Thankfully, they did take a moment to play a verse from the fantastic single “Get Free” off of their most recent album Free The Universe. Those moments of playing music they’ve released on record seemed to account for maybe 20% of the show, the rest of making sure the entire place was dancing and partying as hard as they could. When you have a field full of young 20-somethings on the last night of Sasquatch, you’ve got a good shot as success with that mission.

It’s hard not to look back over the schedule and hear stories from friends who saw other bands and wonder about what you might have missed. I definitely regret not at least checking out Maya Rudolph’s Prince cover band Princess. I missed a lot of Fly Moon Royalty’s set watching Rodriguez across the same field. I missed Mogwai to watch Damien Jurado and Raz Simone. These things happen though, and you can’t dwell on the past. Another Sasquatch in the books, and this year was as good as any.