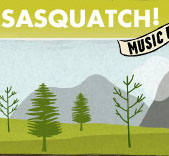 Sasquatch 2007: Notes from the Yeti Stage

When I headed over to the smallest stage of the Sasquatch! music festival, the "Yeti" stage, to catch The Blow's set, all the knowledge of the duo I came armed with was that they're fronted by one woman. I had heard of them, but I didn't know their aesthetic or set-up. I was really surprised by the group's performance. While I came away with mixed feelings about whether I had enjoyed their set or not, I must say I have much respect for singer Khaela Maricich.

As the rest of us dance around like nerds in the privacy of our bedroom, she is courageous enough to do it on stage. And while we all might not have the best vocals while dancing around, Maricich definitely has fantastic vocal range. Her songs are easy to relate to, with topics about falling in love with one-night stands, break ups, and never hearing back from that amazing boy you hung out with once. The everyday familiarity of her lyrics, plus the catchy synth-beats produced and played by accomplice Jona Bechtolt, prove to draw a rabid following, as the crowd was filled with many dancing girls singing along, and erupted into cheers after each song. Although I'm not personally into performers just pushing play on their laptops, their music was very poppy and fun. What really stood out about Ms. Maricich's performance more than her quirky dancing and great singing ability, was her in-between stories. Before each song, she shared a short memory about what the lyrics were about, all of which were very humorous; if she decided to leave music, Khaela should definitely consider stand-up comedy.

Later on in the day, I headed back over to the Yeti stage to catch Mirah's set. After being misled into watching a set of children's songs instead of Mirah's own repertoire a few weeks back, I was definitely looking forward to her Sasquatch! performance. However, I would again leave unsatisfied, although not by Mirah's own doing. The lovely Portlander put on a wonderful set, with her own full band as back up. She played all the fan favorites and charmed the crowd with talk about the beautiful Gorge and sunset.

The only thing I felt could have been better was closing song, "Cold Cold Water." On CD, it's an epic, theatrical crescendo, but during this performance it was half as long, lacking the climatic instrumental interlude. Otherwise, Mirah performed wonderfully, as expected.

The stage and venue was the downfall of the show. The sound crew poorly mixed her vocals, to the point where horrible feedback occurred throughout the set. Somehow, perhaps by not muting the extra mics when not in use, the crowd was picked up so that you could hear talking projected through the speakers in-between and even during songs. The talk consisted of, "Who is this? What stage is this? Is this that chick Mirah?" and other various loud conversations by people who obviously were not fans. Between an incompetent sound guy and inconsiderate festival goers, a perfect opportunity to catch a great local fixture in an amazing outdoor setting turned into an almost unbearable event.