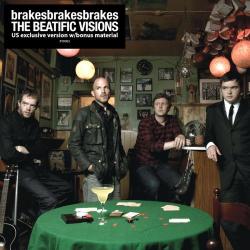 Let’s just get things straight, the confusingly named brakesbrakesbrakes were formerly known merely as “The Brakes,” but there already was a U.S. band called “The Brakes” (who knew?), so now we get Brakesbrakesbrakes (whatever ever happened to just calling yourself “The Brakes UK” or “The London Brakes”?) And to make my life easier, I will just call them “The Brakes," so take that!

Now that we have that out of the way, The Beatific Vision, the new full-length by the Brakes is a lot more restrained than their American debut Give Blood, taking almost more of a country-rock tact to a lot of the songs. The results are decidedly mixed, but there are a still a lot of reasons to enjoy the Brakes (or whatever they’re called).

The Brakes have veered away from the garage/post-punk noise that dominated Give Blood; instead they’re much more a straight-up rock band with oddly Southern Rock feel, kind of like a better Kings of Leon. The guitars dominate the songs and Eamon Hamilton’s high-pitched, snarled vocals just add more layers of dirt onto the rock. The opener, “Hold Me in the River,” thrives in its rock purity and its bitter commentary on the conservative movement ("Can you tell me now what is this love/if it’s comes from above why does it have to be so painful?"). You get a little more familiar Brakes sound on “Margarita” with similar themes ("It’s clear it’s the fear/keeps us under control") – but dang, the guitars are the most sincere this side of Andrew WK. The Brakes have never been afraid to borrow, throwing out "Come on over and do the twist" to open “Spring Chicken,” a rock and roll plea to start a new dance craze although you can never really figure out what sort of dance that Eamon is actually trying to describe.

The band has also never been afraid to, well, make no sense whatsoever, like on “Porcupine or Pineapple,” which features the lyrical exchange of "Porcupine or pineapple/Yowch!/Who won the war?" Indeed! I’m guessing that it's a commentary on the current geopolitical situation, but sometimes it's hard to tell when Eamon just yells "Spiky! Spiky!" However, you have to enjoy the rock and roll swagger that the Brakes like to show, when you can get away with singing lines like "God came down and said I’m fucking bored, oh no/so he took a shot a whiskey and shuffled his cards." Now that’s rock and roll.

Where things get a little more fun for the band is “If I Should Die Tonight,” a song that takes its cue from Hank Williams rather than the Buzzcocks. This foot-stomping ballad rollicks along lamenting not getting a chance to tell your woman you love her before you die; it's far more country than any band from across the pond should ever be. This alt-country is also evident on “On Your Side,” a real Old 97’s-like number. “Mobile Communication” rambles back and forth from talking about semaphore to heavy drug use (they go hand in hand, you know) in standard rock ballad mode. In one of the starkest arrangements ever by the band, “Isabel” is merely acoustic guitar plucked gently with Eamon avoiding the howl that is the Brakes’ signature – and strangely this diversion works well, exposing a new side of the band. The title track has more of a pop feel, much more like the 60’s influenced power-pop of Matthew Sweet.

The Brakes seem like they’re more willing to diversify their sound on The Beatific Vision, diverging from the straight, in-your-face rock of Give Blood and for the most part, this strategy works. Overall, the album might not be as instantly lovable as their debut, but it shows a maturity that you should probably expect from a band that isn’t just a side-project that the Brakes started life as, instead we can hear a band that has plans for the future and want to find out exactly how far they can take it.