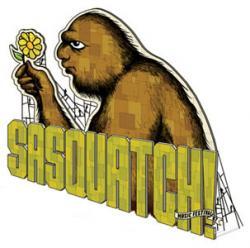 I'm from Texas and all, but sitting on a rock in 85 degree heat with no shade, clouds or wind isn't my idea of completely awesome. Especially when after all that I walk back to the sticky hot tent to drink and then pass out in my sleeping bag, only to await the next day of the same. So that's my excuse for missing Calexico (but my amigo Sam caught them and wrote about it ). On with St. Vincent!

Annie Clark, aka St. Vincent, is a gem. She's cute, can write a ditty of a lyric and has the sweetest delivery. I also think she was amazed and incredibly appreciate of the large audience there to witness her set at Sasquatch. She seemed nervous and a tad unprepared, but her performance was anything but. I know her background is with Glenn Branca but I feel like that gets lost in her solo recordings. Her CDs make her sound like slightly grainy sweetness and light, but live her rocker alter-ego came out. She swayed and jerked her way through the more jarring songs while endearing herself to the crowd with her between-song banter and huge white sunglasses beaming happily outwards.

I've seen the Wrens twice before, and enjoyed them immensely, so I was really looking forward to their set, which is typically very high energy. The Wrens are a garage rock type of band. They drink a lot, wail on their guitars and hop around the stage like they aren't 40-somethings, which is exactly how it went down at the Gorge. The crowd was fairly thin for Sasquatch, and surprise surprise (!) they debuted two new songs! Lots of "we haven't been practicing" excuses (which is often admitted by them) and lots of good, dare I say old-fashioned, rock and roll.

TV On The Radio was my next appointment, and I knew they'd draw a whopper of a crowd. They played their less dancey, more introspective tracks around the first part of the set. It was going to be a hot and heavy set, so the slow transition was a welcome intro. Their sound was rawer, less fleshed out, than their records or their live performances at smaller indoor venues like the Showbox. I think the venue and space gave their sound an airiness that doesn't exist normally. Tunde Adebimpe was as animated as always, stiff-body stomping around the stage with conviction. "Young Liars" was a highlight, evoking much fist shaking and singing along.

Of Montreal doesn't put on a concert, they put on an honest-to-god SHOW. Their performance at Sasquatch wasn't much different. It was a little stripped down from the norm, instead of a jillion costume changes there were only a few, but they sounded phenomenal and the crowd loved them. "Heimdalsgate Like a Promethean Curse" firecrackered off first and jolted the crowd into a dancing fever. The visuals onscreen were terrific, at times depicting Kevin Barnes in an almost pop-star like light. And per the usual, Barnes was dressed like a sleazy 70s porn wannabe, teasing in a slinky shirt and bare-chested. Towards the end of the set Kevin Barnes introduced the next song, which was a cover of Prince's "Computer Blue", citing him as a major influence.

I had waited all day to see Jane's Addiction. I expected a lot, and I guess that was my first mistake, but nothing could save them from Perry Farrell's geriatric antics. Their songs were verbose with Navarro guitar solos only interrupted by Perry gyrating like an out-of-touch old man. It was surreal how old he seemed all of a sudden. Dave Navarro is a very skilled guitar player but neither that nor his boyish good looks could give Jane's Addiction what they needed to seem relevant.