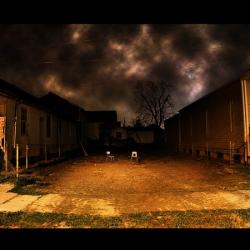 You'd think that making me like any band made up of Mark Lanegan (formerly Screaming Trees) and Greg Dulli (formerly Afghan Whigs, currently Twilight Singers) would be like shooting fish in a proverbial barrel. Yet, this superhero duo, dubbed the Gutter Twins, just seemed bogged down with the weight of the respective partners' career. In the end, Saturnalia personifies the concept that the sum of the parts is greater than the whole.

There is nothing particularly bad about Saturnalia and if you're like me and lap up whatever recording Greg Dulli puts out like a bagle on a hot summer day, well, you're not going to dislike the Gutter Twins. Yet, you'll feel like there could be so much more from this combination of dark and sinister musicians, and maybe that's the problem, that you expect so much from these icons yet what you get a just a solid, albeit uninspired and slightly dated-sounding, disc.

If you want to start at the high point, try “I Was in Love with You,” one of the few songs that bring out the skills of the duo: it, at the same time, is melancholy and tender, complex and straightforward. If they could have bottled this concept, Saturnalia would have been a more satisfying adventure. They approach it again on “Circle the Fringes,” where we can really appreciate the desperation in Dulli's voice, or maybe on “Who Will Lead Us” with its hot and dusty atmosphere.

If you're looking for where the blending of the two took the most hold, “Each to Each” is a minor gem, especially when Dulli and Lanegan “harmonize” their growls leading into the chorus. Of course, the song would be even better if it didn't come across like a Stabbing Westward outtake. As for the rest, tracks like “Idle Hands” and “God's Children” just seem hackneyed and trite.

If anything, the album is just plagued with too much dour and not enough sleaze, coming across like some of those mid-career Nick Cave & the Bad Seeds albums that were almost a caricature of the band. It just feels like an album that came about one drunken night, where Dulli and Lanegan started riffing and suddenly, they're in the studio and suddenly, it's getting a release. Whether they were fully behind it or not, there is a market for anything by these two elder statesmen of American modern rock and while the Gutter Twins aren't a masterstroke, Saturnalia, at least, peaks into the what might have been.