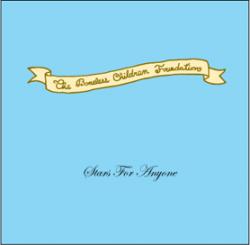 Stars For Anyone begins with beautiful music. The leadoff title track is a sprawling garage-pop epic that comes out firing. Chaotic guitar and drum churn through the song's three minutes and twenty-two seconds, creating a perfect combination of noise and rock catchiness. It's a wonderful tune, and an amazing start to The Boneless Children Foundation's first full-length album, but it's also the high point of the record. That's not saying the rest of the album is bad; it just doesn't live up to amount of fun the title track brings.

For the most part the first half of this San Francisco trio's album outplays the second. "Carl Sagan," the second tune, is a nice little song with half-jokey lyrics playing off Sagan's famous "billions and billions of stars" quote. It opens with the repeating ring of a heavy guitar riff reminiscent of White Stripes. Following up is "Beekeeper," another strong song that, like "Stars For Anyone," meanders through a number of different musical progressions before finishing up with a very catchy ending. The next two tracks, "Sigh" and "Relax," both slow things down at the beginning, leading to rather entertaining head nodding endings.

At this point I'd say the album has used up most of the energy it started off with. Some songs just did not fit well with the rest of the music, and being such a short album this was a setback. It's obvious The Boneless Children Foundation have amazing talent and are very capable songwriters, but the album did not sustain my interest beyond the first half. "My Little Book" and "Eyes Have Had Enough" are good songs on their own, but I was not interested in hearing them after listening to 25 minutes of the disc prior. The quick-paced and rough and tumble rock started getting too much for me at times.

"Get Up" is a rather interesting track found on the second half. It starts off very somber and laid back, but never really gets moving. I really welcomed the change of pace, but the song left me wanting more — almost as if it was a wonderful beginning to a song that doesn't finish. It summed up most of my feelings about the final five songs or so on the album. They lack the energy of the beginning of the album and need something more to push the music to another level.

I'd be curious to see what the band is like live. Quick, nicely written songs played out with good energy is something I think would be impressive live. I would also like to see what The Boneless Children Foundation do next. They are clearly poised to make grand music and it's probably only a matter of time.