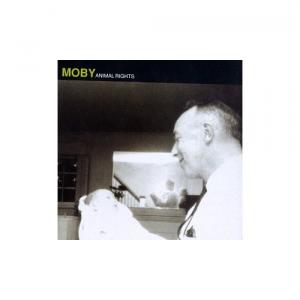 "Say It's All Mine" by Moby

Writing about Moby is about as easy as it gets for a music writer. He's got so many angles he's a bloody dodecahedron, being a vegan christian animal-loving political DJ/rocker/nerd. Moby's career has been full of ups and downs, from high points like Everything is Wrong and Play to abominations unto mankind like Home. Many people would include his Animal Rights album in the category of crimes against music, but I am one of the few who actually like the album.

Sure, he did an almost note-for-note knock-off of the Mission of Burma classic "That's When I Reach for My Revolver" (I can try to convince myself the good to come from that is a revived interest in the seminal Boston band), but some of Moby's tribute to east coast hardcore — and trust me, that sounds as odd writing it as it probably does reading it — is actually pretty good. "Say It's All Mine" is one of those good moments. It's less hardcore and more just plain metal, but Moby hits in with all cylinders, diving from a soft, melodic verse to a thunderous chorus that is filled wall-to-wall with noise that all eventually breaks into a monster guitar solo by Moby himself. It's like Moby wrote the best post-Metallica Metellica song ever. Of course, nobody bought the album and Moby ended up stumbling his way into the Alan Lomax Archive — and voila, Play became a gianormous international smash. So much for Moby's attempt at making hardcore mainstream (and who thought that would work anyway?)