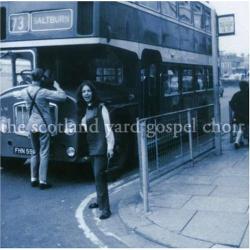 Let's dispel a few potential misunderstanding when it comes to the Scotland Yard Gospel Choir. (1) there are no choirs involved – at least not directly, (2) there is also no gospel, (3) they do not solve crimes, (4) they, in fact, aren't from the UK at all, but instead, Chicago. So, in total, there is really nothing accurate about the moniker of this band. We can forgive them for these misdirections because their eponymous second album is one of the spunkiest sets I've heard in a while, a rollicking good time to be enjoyed by all.

I have to admit, Scotland Yard Gospel Choir does wear its influences on its sleeve: Belle & Sebastian, the Smiths, Billy Bragg. If you're not reminded of these seminal bands when you listen to the album then you're not paying attention. This is not to say that they are just rehashing what has been done before, but much like fellow pop rock mavens such as the Push Kings or Papas Fritas, they wrap themselves in pop like a cocoon only to burst free with their only infectious blend of the stuff. Heck you'd be hard pressed to start an album with more energy than "Aspidistra," a song about the dangers of drugs and the police — it is post-punk pop rock at its finest. However, the gentler side of the SYGC can be truly hypnotic, like "The World Has No Place for Me." It is rich and textured, much like Rilo Kiley's "Hail to Whatever You Find in the Sunshine that Surrounds You," full of tension and passion.

SYGC shares the melancholy gene with fellow mope-rockers Math & Physics Club. "Obsessions" straddles the divide between Belle & Sebastian and Bright Eyes, with cellos driving the song along mixed with vocal harmonies and lines like "I'm sitting at home whiting out the Bible." The song is beautiful pop that takes a sidetrip into a dark Oberst-like nightmare midcourse, rocking the ship back and forth across the sea. "Pins & Needles" is a little more conventional take on '60s-influenced pop rock, showing off some the band's guitar chops. However, if you're looking for pop confections, "I Never Thought I Could Feel This Way for a Boy" is a page out of the Belle & Sebastian playbook, with handclaps and strings augmenting an infectious melody and slightly off-kilter lyrical content.

Much like Cats on Fire, SYGC loves to write songs that have a driving, "dance" beat that are impossible not to tap your feet to, even when SYGC midwestern roots get exposed on "Then and Not a Moment Before." One of the real highpoints on SYGC has to be the closer, "Everything You Paid For," where you find an extension of this country-western melancholy, open and hollow but optimistic at the same time – you'd think that your iPod had shuffled to some Tiger Saw. The song is beautiful and stark. Oddly, it's so different that it almost doesn't fit in on SYGC, but you wouldn't want to be without it.

You have to love any band that can cram so much great pop into a nine-track disc, and that is exactly what you get from Scotland Yard Gospel Choir. Sure, they're not experimenting with augmented notes and bizarre 5/8 times, but they can really knock your striped socks off with pop songs that you'll be humming around the halls. Sometimes you're just looking for fun when you pop on an album and really, Scotland Yard Gospel Choir is just that: good, old-fashioned fun.