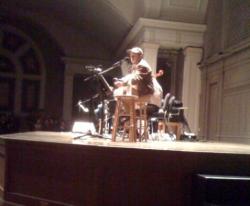 The Magnetic Fields hold a special kind of magic for me. The band's epic three-disc set 69 Love Songs will always top my Favorite Albums Of All Time list; the menagerie of songs within are so delectably miserable, playful, heartful, poignant, ridiculous and wonderful, sometimes all at once, and together they saw me and my single pals through some very hard times, back in the turn of the new millenium. I saw the band play at Bumbershoot 2000 and it was one of my all-time favorite shows ever (right up there with Nick Cave and the Bad Seeds at the 5th Avenue Theater and Elvis Costello at Bumbershoot 1996).

I provide this background as proof of my complete and utter superfandom. This proof is required as a caveat, for the show at Town Hall last weekend was certainly a show for the superfan. The show had no bells, no whistles, no costumes, no sexy outfits, no stage antics. In fact, a number of haters stopped by TIG to blog about how much they disliked the show (Rufus, Randy, I'm looking at you). And I can't argue too much with their complaints. Yes, the venue was rather stark, like seeing the band in a high school auditorium or a church (in fact, the venue WAS a church, and we were in fact sitting in pews). Yes, Stephin Merritt can be an asshole and yes, he yelled at the audience for taking flash photos (hence the lovely iPhone photo I took that's running with this review).

But what were they expecting? Any superfan of the Magnetic Fields knows Stephin is an utter misanthrope. Part of the obsessive appeal of the band lies in just how sincere his social awkwardness and darkness is. And I daresay that most of the audience was well aware of all this, and likely just as big, if not bigger, superfans than I, for the crowd hung on his and Claudia's every banter, and laughed along at lyrics they've surely heard at least a 1,000 times before. Was it a little annoying? Sure. Maybe they should have plugged it with a beer.

None of this stopped me from really, really enjoying the show, though I can't say it was love as it was back in 2000. For me, the songs off 69 Love Songs have rarely been equalled by any others since. Even hearing those songs now, so many years later, had a strange beauty; I am so much happier now that I was then that the tunes seemed almost nostalgic. More importantly, later songs seem a bit forced to me in their unhappiness, and Stephin's bedraggled appearance Friday night only exacerbated this sense. Poor Stephin. Did anyone else want to give the guy a hug… or help him find some less wrinkled clothes?

Nonetheless, hearing the extra long set, one that spanned Stephin's work with the Magnetic Fields, the Gothic Archies, and the 6ths, was an incredible treat. The pared down songs, minus the distortion that especially the latest record is known for, highlighted just how fantastic a song writer Merritt is. And the banter between Claudia and Stephin was charming as can be, whatever the haters might say.

For the superfans, here's a setlist (this is for you especially, Keenan):