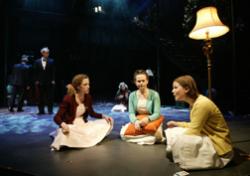 The Secret In The Wings and Rebecca

The Secret in the Wings
Seattle Rep Bagley Wright Theatre

You can't like everything. Even when a night involves fairytales you can't be sure you're going to enjoy yourself. My first thoughts of what this new Seattle Rep play might entail brought images of dark folk tales from large, dusty books of my youth. Books that were filled with stories of small children and ugly hags performing incomprehensible actions that ended horribly more frequently that not. My next thought was a concern that my Wednesday night would be made up of Disney-inspired fluff. Mary Zimmerman's The Secret in the Wings ends up being some confused combination of the two.

I've never been disappointed by how the Rep's stage is transformed. Upon each visit the entire front of the theater seems to become a different shape and inspire a different mood. The Secret in the Wings takes place in a huge, cavernous place: a large, dark staircase sweeps up the back, leading up to small alcoves that overhang the main stage, allowing it to shift from dungeon to den in less than five steps.

The lighting throughout the play is dramatic and interesting. There are three lamps on stage that are almost cast members, at times lying on their sides lending the eerie light of a tomb, at others taking part in a queen's progression across stage. Sometimes the stage goes dark except for the star-like light from above or a single spotlight percing through a still scene, transcribing the characters in shadows.

The colors and costumes are brilliant and fun. As tales shift the female cast members preen and change dresses in front of the audience, melding the stories and the moments between until you can't quite tell them apart.

Despite all this, the mood feels confused and cluttered. At times you are asked to laugh with the entire production. Modern sensibility is mixed with old stories and silliness abounds. Moments later the entire cast is over-taken with theatrical dread for some supposed dark turn in the story.

Props are everywhere and over-complicate the production. Small ships are held in hand and bobbed to mimic sea voyages. Cast members carry trees, picture frames, dunce caps, red balls, doors and feathers. Perhaps if the cast didn't need to spend time and energy ensuring prop placement (and replacement), they could spend it cultivating the dark and twisted mood of the piece, which seems to be the director's intention. The story might be clearer without all the clutter.

The basement of the Seattle Center food court doesn't seem like a place to spend an enjoyable and intimate evening for anyone over the age of 17. Throw in a Sonics game crowd at nearby Key Arena and it sounds even less likely to me. But a combination of the Center House Theatre, the Book-It cast and their wonderful adaptation of the classic Daphne du Maurier novel Rebecca made it possible to forget all the hubbub going on at street level on a recent Friday night.

The play is similar to the 1940 Alfred Hitchcock film, filled with dramatic overtones, a foreboding head maid and multiple layers of deception. There are lighter moments where the characters' words and actions bring smiles and laughter. None of this feels out of place, and the story doesn't seem unnecessarily modified just to provide comic relief.

The most startling difference between Book-It's adaptation and the Hitchcock film is the character of Rebecca. The audience and cast actually see her ghostly image at times as she acts out scenes in the past or haunts Manderley knowingly. This works extremely well in the story and on the stage. Janet Haley is quite impressive in the role — beautiful, coy, manipulative: it's easy to see why so many fall under her spell. I couldn't help but empathize with the new Mrs. DeWinter as Rebecca haunts her every movement. Amy Thone's depiction of Mrs. Danvers, the imposing head maid of Manderley, never wavers. She's as frightening as the character in the film I remember from childhood.

The supporting cast portraying Manderley's staff is great. The gossiping maids and the knowing butler all seem at home on stage, moving props and doorways to form new rooms as the story continues around them. (At the play's end, when they stopped moving to provide a curtain call, I was surprised to see that there are only seven of them.)

Returning to the uninspired chaos above ground afterwards was a jolt. Sports fans and jammed streets abounded. In the spirit of my recent literary adventure I chose not to sit in traffic, and took a long and scenic ride home.