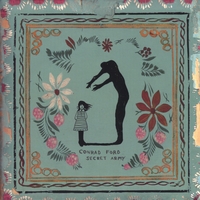 First off, Conrad Ford isn’t a guy named Conrad Ford. Conrad Ford is a band headed by Andy McAllister. Confused? Don’t be. Conrad Ford is named after the legendary filmmaker John Ford and cinematographer Conrad Hall. Conrad Ford, actually, would sound like something John Ford might have used on a soundtrack if he was still making movies like “Stagecoach” and “The Searchers.” He’s dead though, Ford (Carr, too, actually), but Conrad Ford is as strong as ever with their spare, crisp new album Secret Army.

Used on a John Ford soundtrack, I say, because the music is like a vista of sparse scrubland, the vista being their music, the scrub their instrumentation. McAllister, a country-esque Damien Jurado (another local like McAllister), rustles through the songs like tumbleweeds; the strum of a guitar a quiet breeze over a desolate highway; the precussion like a quiet fall of rain on an old tin roof.

Recorded in Seattle (their sophomore effort after 2006’s Don’t You Miss Yourself), the new album is a lean 30+ minute affair, each song a raspy grasp of music, perfect to get a little melancholy on. On “Sinner Street,” a jaunty ditty, he sings about sitting down on Sinner Street. “Shadow Shade,” is a simple slow ramshackle-y number with piano. “Duet” was just that. Sounding like they were in some empty long-forgotten warehouse, it’s quiet, somber, and just a little bit sweet.

Perhaps it’s the economic collapse, but each some is, to me, reminiscent of those images we see of The Great Depression. It’s black and white, the music, a little gritty but crystal clear. It attaches itself to you like a blowing grit, gets under your nails. It’s hobos riding rails; it’s a migrant farmhand sipping on a jug over a makeshift fire; it’s storytelling at the breadline; a little prayer before a meager meal. McAllister, and by extension, Conrad Ford, might have just made quite the timely album.

Even though Secret Army feels like it could have been sung years back, it’s been created in the here and now – the sun high, the dust thick, the vistas obscured by clattering vagabonds.