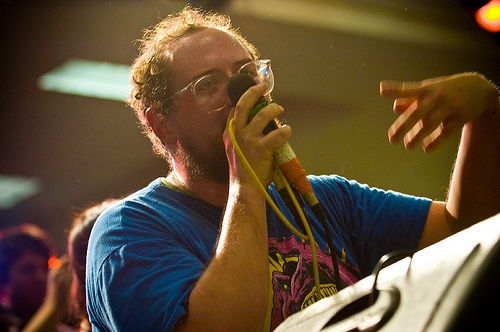 See Dan Deacon tonight for $11 – or a bunch of grease

Tonight, Dan Deacon is playing at the Vera Project and if you bring him some vegetable oil, he'll totally get you in to the show. According to a story from Pitchfork:

Dan Deacon is currently crossing North America with his big band, and he'll need help coming up with enough vegetable oil to power the school bus he's using as a tour van. So anyone who comes out to one of his shows with five gallons of clean, filtered veggie oil ("the lighter the color and the less viscous the better") will get a guest list spot with a +1, according to Deacon's publicist. If you can get Deacon 30 gallons of the stuff, he and his band will cook you dinner aboard their tour bus. All you need to do is write a guy named Geoff ("our oil master") at [email protected]. (no phone calls plz)

the school tour bus the 20 of us are riding in runs on veggie oil. we need help gathering that oil to fuel our bus. if anyone can bring at least 5 gallons of waste veggie oil to one of the shows we will put you on the guest list. it is easily found behind almost all restaurants.

if the oil looks dark and full of crud we can't use it. the lighter the color and the less viscous the better. if you can bring us CLEAN and filtered oil we can put you + 1 on the list.

to arrange the grease for list swap you can call geoff at 862-266-6130. call or text him. he is our oil master. the more oil the better. we have enough storage for 100 gallons of oil. if you can get us 30 gallons we'll cook you dinner on the bus (we have a little kitchen and many great cooks).

please repost this to anywhere you think it might help. thanks you!

Doors open for Dan Deacon's show at Vera at 7:30 (all ages, naturally). At one of his shows at Neumo's last year I wrote:

Yet, in the long run, none of that mattered — the stage setup, the rant against a critic, being close but too far away to see what was going on… What Deacon did was bring lots of people (many of whom were stepping inside of a rock club like Neumo’s for the first time) out of their homes on a Sunday night for a set that was always engaging and entertaining. I saw several Dungeons and Dragons nerds dancing on the stage. His fans sang along to every word when there were words and danced when there weren’t. He’s a populist who tries to get everyone involved in the show. Some of his songs I really enjoy, others I’m not feeling. His music is often disjointed and lacking a cohesive structure (but that’s my problem, not his), so of course it’s going to be hit or miss. I may not always like the destination, but that doesn’t mean I’m not happy to go along for the ride.