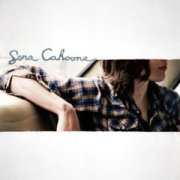 After years of supporting others behind a veil of cymbals and snares, Sera Cahoone (Carissa’s Wierd, Band of Horses) has thrown aside her sticks and climbed over the drum kit to take the stage for herself, where she takes the best elements of the standard modern, country-folk styles and makes a unique, honest, and wonderful record all her own.

I first heard Sera Cahoone on KEXP’s Song of the Day podcast. I was switching on the iBook for another long day of writing pharmaceutical advertising copy when iTunes opened and indicated the updating of my daily podcasts. One was named "Couch Song," by a woman with an interesting spelling of her first name and, according to the informational blurb accompanying the track, a new self-released and self-titled record.

By the end of the day the "frequently played" function proved I had listened to the track enough times for it to have already made the top 25. It struck me as similar to many of the acoustic guitar, singer-songwriter songs I’ve heard before, and her voice was more or less a simulacrum of Neko Case. I made getting the record a priority; it being self-released and me living across the country, it took nearly a month.

I love the singer-songwriters-with-acoustic-guitars genre of music more than any other, except for maybe classical piano. However, after that Dylan guy, it’s a dangerous territory to approach. Songs like Cahoone’s are music at their most naked. The attraction to this type of music, what keeps tit both fresh and still marketable, is appreciating the starkness and honesty the medium of voice and guitar inevitably brings. A listener feels let in on a secret somehow, hearing something not padded with absurd amounts of instrumentation.

Cahoone invites us into her world of words and plucks, where it’s always raining slightly, but where that rain is only heard from inside a warm house, within the tangles of lovers’ arms or memories. On "Last Time" she illustrates the moment where a relationship cracks towards its broken ending ("Here we are, the same old sad song / keeps playin’ on and on and on / I don’t know why you just can’t realize / that you’re like a storm in here!").

Meanwhile, on "Couch Song," Cahoone fast-forwards to the calm after the storm, waiting for a lover’s return while coming to terms and convincing herself the relationship can work again, and that, no, this time will surely be different. "I am waiting for you to come and bring me back / I will lay here quiet, honey don’t leave me out here all night.…If we don’t talk, I won’t mind / Cuz it’s the only way to get along sometimes."

Her training as a drummer obvious, the articulate plucking combinations through the songs’ basic chords keep the entire record driving forward, preventing the momentum from dying down and making for an intoxicating listen. In the end, the record leaves the impression of a graceful, luxurious stream; it's a pleasure to dive deeply, deeply into it.