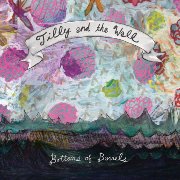 One of the silly questions I tend to ask myself when I listen to an album for the first time is "hey, do they sound like they had fun when they made this?" I'm not really sure how I can quantify this feeling, but sometimes you can just tell from the energy and looseness of the music that you just know that they must have had a great time in the studio when they put music to tape (or hard drive). Tilly & the Wall clearly have fun. It's obvious. If you can't feel it when you listen to Bottom of Barrels then you've probably had some sort of horrifying fun-removing accident that makes you think the Muppets are dumb and that bunnies in the park are verminous pests. Tilly & the Wall's first album, Wild Like Children was one of the most underrated albums of 2004, sneaking in as the first album released on Conor Oberst's imprint Team Love Records. Bottom of Barrels takes off from the Wild Like Children launching pad and expands their sound even further, maturing in song-writing and production create an album that will hopefully not go so woefully unnoticed.

If there's one thing you notice about Tilly & the Wall right off the bat, it is their percussion. Honestly, they sound like they've hired a team of tap dancers, floor stompers and spoon players to make as much noise as possible with the end result being some of the most remarkable "drumming" you'll hear. (It's not far from the truth: they actually have a tap dancer, Jamie Williams and no real drummer. Take that Spinal Tap curse!). The album opens with Neely and Kianna shouting off the time and breaking into the infectious melody and beat of "Rainbows in the Dark", a song full of horns, guitar, piano and pretty much everything short of the sink. The intertwined vocals from Neely and Kianna are equally haunting and sweet as they sing about the gift of a fat-lipped grin. Derek Pressnall takes the reigns in "Urgency" that is one of the tightest rock songs that Tilly & the Wall have done, sounding like a lo-fi New Pornographers. The real growth of the band is apparent on "Bad Education," a song that, whether they meant to or not, captures the mood of the Pedro Almodóvar movie of the same name, mixing Spanish guitar and horns with the flamenco beats from the feet of Jamie. The song is a joy to hear, enthralling and original as Neely and Kianna's vocals capture the mood set up the music perfectly.

Bottom of Barrels also takes it's time on some splendid slower songs like "Lost Girls" and "Love Song" that are more bare than anything the band has done. You can hear the cross-pollination with fellow Omahans Bright Eyes on these tracks, especially "Love Song" where Derek sings Oh pretty love/don't worry/with me you don't need a place to hide/so just sit real still/and the light will flood in over the hills. The foot-stomping is gone, but the raw emotion of the songs expand what you expect from Tilly & the Wall. However, the interlude quickly makes way to more thundering songs like "Sing Songs Along," with what might be the signature Tilly sound: thumping percussion, back and forth vocals from Neely, Kianna and Derek and infectious melodies. "Black & Blue" takes this sound and adds a little more edge to it as Neely and Kianna sing a love song imploring I want to know everything about you/so let's drive through the night. The vocal melodies on "Black & Blue" are more mature and complex than previous efforts and it pays off.

They finish Bottom of Barrels with musical experiments that jump from genre to genre. "Brave Day" actually features a real drum kit and has much more of a folksy, Americana feel and proves that Tilly & the Wall can exist quite well outside of their potentially novelty percussion. "The Freest Man" is an electronic song similar to the sound of Bright Eyes' Digital Ash in a Digital Urn or Wild Like Children's "A Perfect Fit", telling the story of a friend with some problems as they sing but this boy I know, he is pure of soul/he just gets lost sometimes in his chemicals (author's note: Conor?) The album closes with the lighter-raising "Coughing Colors," a, well, power-ballad driven by Derek's vocals over piano.

Tilly & the Wall seem to be able to straddle multiple genres and master them all with ease. Bottom of Barrels shows a remarkable amount of musical maturity for only the second album from the band. They don't seem to be afraid to take chances with their sound and don't miss a step along the way. If anything, Tilly & the Wall know how to make an album that captures the energy they have when they record it, and with that, they have something that many bands never figure out how to do.