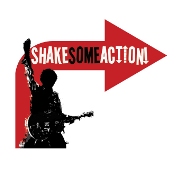 Some people say it's wrong to love power pop. Rock music shouldn't be catchy and melodic, they say, it should be screeching and rebellious. They're wrong. Completely. Anyone who has popped in Matthew Sweet's Girlfriend or Elvis Costello & the Attraction's Armed Forces knows better. This rock captures more heart than any noise rock could hope to in any 15 minute distorted epic.

Power pop is the realm where Shake Some Action! exist: finely crafted songs you can dance to with a bittersweet edge that make them perfect for any guy or gal who likes to rock but has, you know, feelings. Yay for feelings!

For those of you who linger in the Pacific Northwest, Shake Some Action! is actually a new incarnation of The Jeunes, and a lot of what you hear is the child of former frontman James Hall. He comes across as part Poster Children, part Stones Roses, and part aforementioned Matthew Sweet. Most of Shake Some Action! songs have an undeniable catchiness without being overtly cheesy or poppy (yeah, we're not talking John Mayer or Jack Johnson territory here). The album itself is almost entirely Hall taking on all the instruments (with help from David Bos on the guitar), but it has a cohesive sound that speaks volumes for a "new act" like Shake Some Action!

Opening track "Sound of Your Mind" sounds like a lost track from Teenage Fanclub's classic Bandwagonesque, with rich guitars overlain over more guitars all leading into the vocal harmonies of the chorus. It's exactly the type of song you want to lead an album such as this: loaded with pop sensibility but also a bit of bittersweet regret and topped with lots and lots of guitars. "Complicated" continues the trend with more of a Matthew Sweet feel and tone as Hall sings "How did it get so complicated/yesterday was so easy." Something about the combination of regret and vocal harmonies that is hard to explain, but feels so right. Things slow down a bit on "Orange Peel" and "Wasting Time," songs that feel like something from the long-lost Gigolo Aunts (everybody remembers them, right?). "Wasting Time" is especially strong, with a touch of 60's organ, horns and tapped rhythms that make it possibly the most fully realized song on Shake Some Action!, at least melodically, almost veering into Roy Orbison territory.

However, the real strength for Shake Some Action! is the rock, and the pinnacles are probably "Damaged," "What You Want Me To Do," and "Someone Else's Friend". They're full of hooks and dripping with vocal and instrumental harmonies that would make The La's blush. "Someone Else's Friend" might be the most satisfying song on the album, writhing back and forth from a pure power pop gem to a more restrained power ballad. "Damaged" is a more Springsteen-like in its take, asking "I've been wondering/how'd you end up so damaged?" over pure late 70's/early 80's guitar, almost bordering of being U2-like in their tonality. However, "What You Want Me To Do" is destined to be the crowd number live, right down to the barely audible countdown at the beginning — this takes the Shake Some Action! sound to the streets, crashing the guitars and driving the drums into a nearly perfect power pop gem, right down to the bass solo criss-crossed with guitars. I couldn't think of a better way to close out the disc.

Shake Some Action!'s self-titled album is a strong debut from Hall and the gang. While it might not be the most original indie rock disc to come out, it doesn't hold anything back for its 37 minute run time and what it does, it does well. There is nothing wrong with rock for rock's sake and that is what Shake Some Action! offers to the listening public: something to dance to, even if you think you're too cool to dance to it.