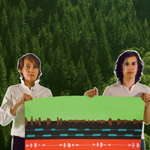 For those of you who have enjoyed the nonstop glee-fest that is Six Feet Under, you might remember Claire's surly/crazy art teacher. At one point, he states that good art—real art—should make you feel ill. Now, he probably meant that art needs to produce a visceral reaction resulting from an instinctive response of revulsion that conveys some sort of deep, primal meaning. However, I don't think it has to be as pretentious as that. Sometimes, when I hear an album or song for the first time, I get the sensation of illness, but it more like that feeling you get when you're on a rollercoaster or—gasp, dare I say—falling in love. It is a sense of goodness that makes you feel you lack the proper words to describe it to others. You know you can listen to it over and over and still feel like you haven't solved it (see Nick Hornby's Songbook for that phenomenon.) Anyway, the point here is the first time I sat and listened to Paper Television, I had that sensation of giddiness, and dammit, so should you.

Now I have to admit, I don't know much about the Blow. However, I don't think it matters. Paper Television is an electropop magnus opus that could not only please the hordes of Postal Service groupies but even draw in a feel of the shy, awkward Xiu Xiu fans hiding in the corner. The album keeps you guessing what direction it might come at you next, which is impressive, especially in its nice 31-minute package. The opener, "Pile of Gold" does an excellent job of setting the tone, mixing hard beats with quirky themes of commodifying, well, sex (they want it/its economic/they need the heat that we export/of course some guys will try to force the prices down/by pushing girls around). It has a bit of a CSS feel but with a tighter, less campy, almost post-industrial feel.

From there, we enter the pseudo-Blondie territory of "Parentheses" that captures a bit of the "song within a song" magic of Franz Ferdinand's "Take Me Out". It might also be the most tender indie lovesongs I've heard in a quite a long time with lyrics like there is something in the deli aisle makes you cry/of course I put my arm around you and I walk you outside through the sliding doors/why would I mind?. It is almost perfect indie electropop, capturing a bitterless Rilo Kiley feel in the realm of Jimmy Tamborello. However, as great as "Parentheses" is, it isn't even the best song on Paper Television. That honor falls to "True Affection," a minimalist masterpiece driven by a thick synthesizer line over hand claps/snaps. If you've ever wondered what it might be like to hear the Neptunes produce Bjork, this might be pretty close, right down to the oddly oceanic lyrics. It is a rare song that almost everyone who has heard it with me (so far) remarks about it without any bit of prodding on my part. The whimsical, dancing line over the bridge as BLANK sings I never felt so close/I never felt to all alone is one of the most sublime musical moments of 2006.

There are other highlights on Paper Television that brief descriptions just do not do justice. The early Pet Shop Boys-influenced "Fists Up" is an irresistible dance number that is dying for a monster remix by Chris Tennant. The marching band percussion of "Long List of Girls" is frenetic morphing the song a battlecry of a scorned lover (I guess I'm on the long list of girls who love the shit out of you). A more electrogoth feel emerges in "Eat Your Heart Out," to a point that the Faint should feel envious of the sinister snarl produced by the Blow while "The Big U" extends the theme of jealous lovers (I'm not immune to all the fears that float in my atmosphere/am I awful?/will I/I end up alone?). And this doesn't even hit the tip of the iceberg of Paper Television.

The Blow has recorded what can only be considered a sonic sucker punch from which I'm still attempting to recover. Paper Television has an ease and flow to it that makes it impossible to not be absorbed by the mix of beats and broken hearts, especially if you have any predilection towards indie melodrama. Maybe its this volatile mixture that hits me fight-or-flight instinct, but in any case, it is get that giddy feeling merely from the noise coming from the speaking in front of you.