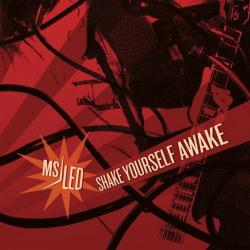 Shake Yourself Awake, the latest offering by local quartet Ms. Led, was written over the span of two years. It’s the band’s most personal release to date, with lyrics about lead singer/guitarist Lesli Wood’s struggle with her Multiple Sclerosis diagnosis amidst living a hectic-busy life (musician and law-school student). “I have dealt with being told what I can and can’t do on so many levels. Having MS, I was told that I wouldn’t be able to continue playing music,” says Wood. “I was told to slow down, rest more, maybe consider giving up parts of my life… Who says you can’t do what you want?”

The record spans the gamut across its 10 tracks, from danceable punk to soft-spoken ballads, the range of song styles no doubt echoing the range of real emotions behind the songwriting. What’s a shame is that the lyrics to Shake Yourself Awake aren’t included. I suppose this is probably by design, as they’re indeed personal and meant to be heard, not just read. But there are some beautiful moments captured in those words that I had to strain to hear. Make sure you listen with attentive ears.

In “There’s No Room for You Here,” my heart aches as Wood sings “There’s nothing more I have to give to something so absurd/You tell me how I’m supposed to live… I’m leaving this and all that it stands for, for my peace of mind…” True to form, Wood upends the words and mood on itself with a rally cry: “Now’s the time, so what are you waiting for?” I can only imagine what a rollercoaster of emotion it must be to be told you physically can’t — shouldn’t — do something; on the one hand, you want to believe the experts know what they’re talking about, and on the other, you want to defy and prove everyone wrong.

Wood’s doctors had better take heed, because she and her bandmates show no signs of slowing down, instead zipping through punk riffs and sing-along, anthem-raising choruses. “When everybody just says no, I say go…. Every day is opportunity to make waves and everyday is your chance to try to make change,” spits Wood in “Have it All.” The infectious hooks and call-to-action lyrics in tracks like “New Agenda” are classic Ms. Led: energetic, impassioned, raw, and danceable. Mix the blazing guitars with inciting words like, “We’ve got to educate, communicate, organize, criticize, demand to know why, unify, rectify,” and it’s almost impossible to be complacent about anything. And when Wood croons, “I wanna hear the people sing/I wanna hear the people say ‘no more,’” who doesn’t want to join her?

The album, recorded at hometown hero spot London Bridge Studio, is chock-full of rocky, distorted guitars mixed against beautiful vocal swoops, as in “Somewhere on 101” and “Willing to Stay (Shattered).” My favorite of the lot is “Up to the Old Tricks,” a tale of falling for someone despite your own best wishes. Lyrics like “I never wanted to need anybody/get too close then move on to the next one” and “I have a history of instability… never could settle down, never could sit still/never wanted to wake up in the same place/you’ve been a change in me” could almost seem cliché and too fluffy for this powerful band, but they pull it off earnestly. I love the surf-rock bounce and handclaps that accompany 1960s girl-group harmonies on this track, and the chorale of vocals in the bridge is enormously powerful on headphones (This moment makes a reappearance at the end of closing track “Fools,” as the album concludes with a reprise of the doo-wop chorus).

All in all, Shake Yourself Awake is a telling album — the kind you could listen to at any given emotional moment and respond to. Subject-wise, it might even be too heavy to listen to, were it not for all those awesome poppy hooks and bouncy rhythms.