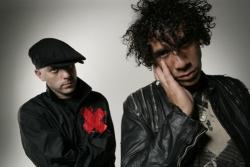 She Wants Revenge at Showbox at the Market

Last Thanksgiving I spent my holiday weekend in Las Vegas. There were numerous reasons I picked that particular weekend, but mostly it was to see She Wants Revenge on a weekend I could take off from my day job. I was digging the band’s debut, self-titled record for most of 2006 but the timing was never in the cards for me to make it to one of their three Seattle shows that year (the last one fell on the same evening Regina Spektor was at the Moore).

Yet, that show was underwhelming. I sat in the sparsely-populated balcony of the House of Blues in one of least rock and roll cities in America. My opinion was that the band tried its best to put on a good show but it was difficult for anyone (myself included) to show much enthusiasm when your band is the 27th hottest ticket in town (and most of the popular entertainment options on any given Vegas night are comedians you know but don’t respect, guys making funny voices, and people with “amazing” before their name making shit disappear). She Wants Revenge was not bad at all – they sounded tight and played a set for over an hour (if I remember correctly) – it’s just that a great show was not in the cards that particular night.

Monday night, though, was a chance to see the band under a different set of circumstances. They were playing at the Showbox at the Market, a much more intimate (and far less corporate) venue on the evening before their second album, This is Forever, finds its way into record stores.

Overall, this show was much, much better. She Wants Revenge are definitely a derivative band. They sound a lot like Depeche Mode or Joy Division most of the time. In fact, if the members of Joy Division formed a band that made dance music…uhh, never mind. Yet, I’ve admired the fact that they are intellectually honest enough to admit to listening to Joy Division. (Hey there, Interpol.) You don’t even need to hear “Tear You Apart” to notice the influence. Their songs, which often have dark subject matter or overflowing with lust, are catchy and well-put together.

With electronic beats and frontman Justin Warfield’s monotone delivery, there's not a lot of room for emotion in the music. Yet the band seemed far more humble and sincere than I expected. Warfield said they were not sure if anyone would show up and considered playing the much smaller Crocodile instead but was blown away by the large crowd (it was pretty damn close to being sold out) that made it out to see them on a Monday night.

The band’s set was divided nearly equally between songs from their two albums, while being book-ended by the two best songs from their first album (“These Things” and “Out of Control”). They brought a lot of energy to the set and were determined to ensure everyone enjoyed the show. At one point early in the show, Warfield called someone in the front out for slam-dancing or pushing or some other form of show-going assholery, but later invited the same guy up on stage for the final song while Warfield sang “Out of Control” with his arm draped around the guy. Personally, I preferred the way James Murphy (of LCD Soundsystem) mocked someone for similar behavior in the same venue a few months ago (“if you’re dancing and there are only dudes around you, then you’re doing it wrong”), but I can’t help but appreciate Warfield’s populist approach to crowd pleasing.

It was not until just past midnight that the band finished – after playing for about 70 minutes. This show was the She Wants Revenge show I want to remember. As for the first one, well, what happens in Vegas…

1. Replacement
2. Out of Control