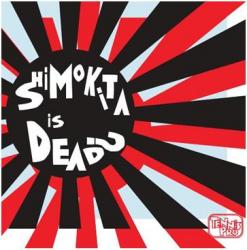 Usually when a band gets down to business time it isn’t always fun: it can be a release of pent up disappointments and missed chances. But Tennis Pro do a complete 180 degree breakdance spin and, instead, throw a party of a record. And their world domination just means fun for everyone at that party. The opening lines of tight gut-funk opener “Dance Hit Number 1″ (this isn’t a track on a UK greatest wavo-disco 12” from the 80s compilation??), upon which is preached, “Are you downtrodden my brother? Afflicted, my son? Well, pick yourself up, you’re not done.”

From there, drummer Sean Lowry, vocalist and guitarist David Drury, and multi-talented bassist Philip Peterson (oh yeah, vocals, strings, backrubs, brass, breaking glass, keyboards, champion snogger, knows a guy, who knows a guy, works a room, keeps swinging, et al) just fully determined to break out of the miasmatic indie rock ghetto of focused failure and small club woes. The big fat bold blue sound of Shimokita Is Dead? puts all the clocks to bed and demands the guests have at least one more, to paraphrase the sweet warning of ” Saratomi Bicycle” — those beloved fellow partiers being Dita Vox (Thee Emergency!), Cristina Bautista, guitarist Matt Black, Jessica Abbey, and Blake Jeffcoat. Their crisp, welcomed talents add to the jumped-up franticness what all those weed dealers dealers did for The Clash on Sandinista! Except in one third the size and only dubbed out at the end of a couple surfy, bonfire-glowing burn-down tracks (and you got to have those by 3 am).

Honestly, where previous (third) album Are You There, God? It’s Me Tennis Pro perfectly sort-of evoked the dark, down edges of the ’00s (indie feeling creepy about the good times being almost gone), the band has brought a whole new barefoot, mock the cops before you get the pepper spray, antagonistic playfulness recalling their balls-hanging-beneath-the-dress live shows. The trio is a briskly playing, siren-winding shit-hot blur of sweet power pop and post-psyche on this fifteen track creature of joy. There’s still some serious messages here beneath the messing-your-mind-up hilarity (the clap-dazed and Gary Glitter-crunchy “Clothing Optional Christian Barbecue,” the vividly visceral “Song Detergents”), but every other track is a straight ahead MAKE THIS A TOP TEN HIT Fountains Of Wayne and Weezer first LP-type hit. My first pick: “Make You Think You Want Me,” which I think I hear on a thousand radio stations with a true clue right now. Please fetch me a Captain Morgan’s and Cherry Coke, and I’ll give you my theory on the rest all ready for individual put-em-out treatment. Make it a double because summer’s just starting, and there’s plenty!