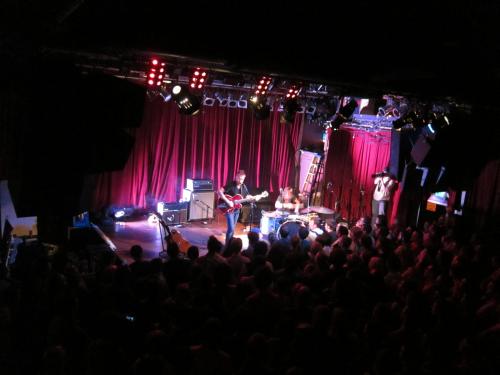 One night with Two Gallants

Man, Two Gallants are a force to be reckoned with. After releasing less than a handful of records on Saddle Creek and after taking a two year break, it seemed like Two Gallants gained, not lost, steam after their hiatus. We were lucky enough to have caught them on their summer tour with The Mumlers and with support by Broken Nobles at Neumos on Monday night.

It was strange — yet still fitting — to see Broken Nobles opening the show. Seemingly drawing from the same influences as Two Gallants, it was kind of like being transported back in time to see one of those classic rock bands that never made it. Equipped with long hair, open shirts, and aviator sunglasses, they took the stage and started with a guitar-vocal duet. I thought this was the highlight of their show as the rest of their set morphed into songs that KZOK wouldn’t even play… to clarify: by no means was it awful, I even found myself singing along to a song of theirs — it was rather more of a sharp contrast point between them and what we were expecting from the mighty Two Gallants.

The Mumlers came up next and delivered a pleasant set. The Bay area group had a great sense of harmony, their palate was full with a tuba, saxophone, and a vibraphone;and it was downright cool to see these guys out on stage having a good time. Unlike Broken Nobles, The Mumlers delivered a new take on a more classic sound. I’d definitely recommend checking the two opening groups out if you are in the mood for a more vintage-esque band.

After a good deal of waiting (seriously, they were almost a ½ hour late), during which time I entertained myself by spotting local notables like Telekinesis’s Michael Benjamin Lerner in the crowd, Two Gallants took the stage. If you’ve never seen them before: Adam Stephens splits his guitar into two separate amps — one taking care of the low end and one taking care of the high end in order to give more depth to the duo’s sound. Tyson Vogel’s drums were set up right next to Adam, and once everything was up and running they began to thrash harder than any plugged-in folk duo on earth.

I think that’s what made this show so special. After seeing these two low key classic sounding groups, Two Gallants were able to take a new spin on folk music. They played everything with the intensity of frat boys after three Four Lokos, like animals on the stage. Even after hard renditions of “Las Cruces Jail”, “Steady Rollin’”, “Despite What You’ve Been Told”, and “The Hand That Held Me Down” among others, the two were able to end the set with an extremely powerful acoustic performance sans drums of “Seems Like Home To Me.” Their new songs were great too! Adam seemed a bit shy about their new ones and he timidly introduced them by saying “This is a new one. Applaud even if you don’t like it. We could use the encouragement.” But it seemed like everyone in the crowd dug the new ones just as much as the classics with sounds of “That didn’t suck!” ringing out from all corners of Neumos.

Overall, it was a great show — hopefully these guys will be back soon. It was quite refreshing to see them back out there thrashing on folk tunes like only punk rockers could.