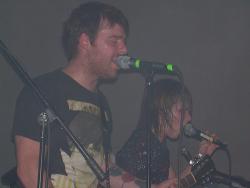 I was hooked the first time I heard the Shiny Toy Guns’ song “Le Disko”. I remember driving to work very early one Sunday morning and hearing this song on the radio. It had a catchy beat and its female singer had a bratty but sexy voice. It was a song that felt like it was constructed with my personal tastes in mind. When I heard the song, though, it was on The End on a weekend morning where the programming was selected by an iPod Shuffle. That meant that there was no lead-in DJ telling the handful of people awake at that godforsaken hour what we just heard or were going to hear. It was in between a series of commercials, so when that station used to have their 24/7 playlists online, it was still no help. Nor was a Google search of the words from the chorus I remembered (“ride the racecars”).

I listened to that station regularly because I was hoping they would play that song again, and, more importantly, tell me what in the hell it was. God knows how many shitty Rise Against songs I heard along the way. I eventually figured it out and quickly found the mp3 and played that often. The subsequent single, “You are the One”, moved me much less. It was fine but felt like a mediocre song amongst mediocre radio songs. It was a more straight-forward rock song. Like with almost all pop songs, my interest waned and found other bands and other pop songs that moved me and Shiny Toy Guns fell off of my radar. I still continued to love “Le Disko”, which I thought was perfect (and until the bridge kicks in, I still do), but it was now in light rotation.

That pretty much brings us up to this week now, doesn’t it? Shiny Toy Guns just completed another record, called Season of Poison and they were touring in advance of its November release. This tour included a stop at Nectar last Wednesday. The show was sold out at least a week in advance and I found myself very lucky and excited to find out the day before the show that I would be able to go. That it was at Nectar, a club I really enjoy going to shows at and one that has a very friendly staff, made it all the more exciting.

When I got to Nectar, it was a little after 8 and it was already packed. The crowd was the only disappoint part of the evening. I think my experience was similar to my very smart and talented friend Laura Musselman’s when she went to the Okkervil River show last week. She found a much younger crowd and one unfamiliar and unexpected. I don’t know what I expected the Shiny Toy Guns crowd to look like, but I certainly wasn’t expecting a crowd that looked like a meetup from the website hotchickswithdouchebags.com. Seriously, if you want to show a band that you love them, don’t shove everyone else out of the way so you can be up front jumping up and down to the one song you heard on the radio, just buy a fucking t-shirt.

I didn’t go to Nectar, though, for the crowd, I went because I liked the band. I really did enjoy the set. They played for an hour, finishing just before 11. Despite a speaker that was crackling a little bit, the band sounded good and tight (which I guess is what you would expect from a band that has gotten some “alternative” radio airplay). The crowd didn’t seem to get into it too much until the last song of the main set and the encore – then every asshole in the club needed to be up front, stat. Most of the songs were sung by guitarist Chad Petree and/or new singer Sisely Treasure.

I really liked how “Le Disko” sounded, and I was a bit apprehensive because a new singer, Treasure, replaced previous singer Carah Faye Charnow. It was my favorite moment of the show, but only had gotten a tepid but polite response from the crowd. “You are the One” was conversely crazy.

Overall, though, the set was very good. It transcended the crowd that watched it.