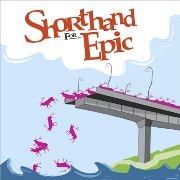 Shorthand for Epic can easily delude you. For one thing, there's enough meaningful content in these three songs for an ouvre of lesser bands. Also, the blue and pink cartoon packaging of this EP seems so harmless. But then you see the animal cut-outs are lemmings on the album art, falling off civilization's edge represented by a freeway (hmmm, oil?). And the closer you listen, the more their sweet, crisply funky dance rock can help wake you up against the deception everyone around you seems to be swallowing. Think the same sort of cool musical joy that bands like The Specials and The Jam and The B-52s specialized in, colorful mod music with very serious and extremely intelligent lyrics.

The swooning keyboards and vocals of Brooke Harker hit you first on "My Own Private Weimar," as Billy Bullock spy-surf slashes at his six strings along the wall-of-sound rhythm party from drummer Stormi King and bass player Larry Brady. Captured perfectly in the studio by Conrad Uno (The Supersuckers, Red Dress, Posies), Bullock's Strummer-snarling vocals spit out prophecy no one can make a profit from: "I saw you reading but the book was upside down," and "Here in the end times… God won't mean a thing," ("End Times," which deliciously recalls Blondie's "Union City" off the similarly deceptive catchy-but-cutting Eat to the Beat album.)

"We're all going to die despite our best intentions," Bullock sings, pointing out our "little armageddons" like only a virulent ex-Catholic can do. Like with his previous band Mea Culpa, Bullock is pissed off, and ranting eloquently (life is paradox, get over it) about how fascism creeps into our everyday relationships ("Weimar"). Shorthand for Epic is calling for a personal revolution, insisting on an intimate revelation, that "the wolf is on the guest list," and it's time to stop partying with it. And after those words sink in, fuck dancing, let's change the world.