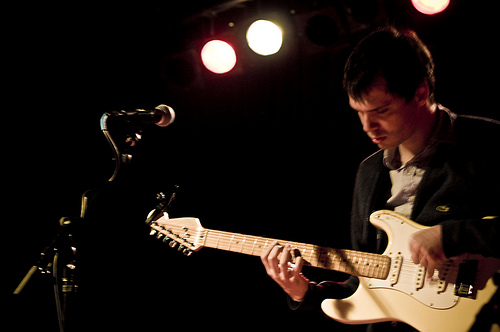 I have come to really dislike putting together “Best Of” lists or year-ending spreadsheets of music that everyone has already heard. This time I’m gonna do it differently…Shrie -style! These are just a few albums/songs/artists that tickled my fancy and got some good stereo-play at our house. Some are indie critic darlings (and disliked by many), some are sure-fire ins and some won’t be at the top ofanyone’s lists this year. It’s a mish-mash of sonic goodness, extrapolated on by your friendly local music writer (and sometimes critic).

In alphabetical, not ranking, order. The “Top Ten” theme is too restrictive for my wily mind to grasp.

A Place to Bury Strangers – Exploding Head
As I’ve noted before, this band kicks my ass to hell and back. Noise with a purpose.. sheer brunt psych-rock reminiscent of Jesus & Mary Chain.. superb.

Animal Collective – Merriweather Post Pavilion
This album is a favorite, an early favorite released so early in the year, because I played the shit out of it. I was obsessed… and with good reason. The impeccable complexity of sound, which could turn cold but remains engaging and warm throughout, is just what my ears needed this year. It’s a fruit basket of tones and movement, playful and large and utterly addictive.

Atlas Sound – Logos
Bradford Cox seems to grow with each album, each venture into music-making. Logos is evidence of that slow and hesitant transformation. It’s fuzzed-out and tricked with timely percussion and droney swells. They lyrics are at times heartbreaking, like on “Sheila”, but approach frivolity at times… it’s a mixed bag that he’s carefully constructed to ebb and flow. Each track different enough from the last, but fitting together perfectly like a puzzle.

Bachelorette – My Electric Family
Bachelorette charmed the hell out of me when they opened for Bill Callahan, so much so that we bought the album during the show. It doesn’t fail to satisfy… the meshing ofsynths /keyboards/computers and her lively step and voice achieve a hand-woven, comfy aesthetic that has been an irresistible listen for months now.

Bibio – Ambivalence Avenue
Bibio already released Vignetting the Compost only five months before the release of Ambivalence Avenue, so a new album caught me completely by surprise. Often channeling Boards of Canada, Bibio seemed to take a slightly different direction on this new release. It’s more autumnal, letting natural elements and sounds of nature shine through and in turn creating something a bit more organic. Summery, warm and brimming with found sound and a childlike feeling of fascination, Ambivalence Avenue far exceeded my expectations.

Black Moth Super Rainbow – Eating Us
BMSR are weird. They’re trippy and psychedelic and have, fittingly, toured with the Flaming Lips. I immediately fell in love with their earlier release, Dandelion Gum, and while this album is less poppy in a lot of ways it still maintains the gorgeous arrangement and hazy vocoder vocal style. The sound is more polished, more impeccably layered… the influence of famed producer David Fridmann to be sure. This album was meant for a sunny joyous day. It’s root is in childlike and fun sounds, but the intrigue continues as each layer of sound expands and blooms around you.

Dirty Projectors – Bitte Orca
There isn’t much to say about this band and this album that others haven’t said already. Their live show was phenomenal and I still can’t get over the other-worldly voices and stunning guitar rhythms on this album. It’s a slightly challenging listen because it makes you think and hear the background intricacies, but it’scatchiness and bright sensibilities firmly plant it in the realm of pop music.

Fuck Buttons – Tarot Sport
Fuck Buttons are technically a noise band. Their innate ability to put together a fine melody and accompany their well-placed noise with a very modern electronic approach places them outside the constraining “noise” category however. Their songs are cinematic, bold and important-sounding. Tarot Sport is fantastic electro-with-a-dash-of-weird. Tribal, industrial and complex, it’s not necessarily an easy listen but it is extremely worth the effort.

Gui Boratto – Take My Breath Away
I’m an unabashed fan of IDM and complex dance music. There’s something about a strong beat and the way crafty fingers seem to be able to place those beats into booty-levitating sequences… it makes me swoon. This new GuiBoratto release is heavy with dance sentiment, void of any raver or house fluff. This is dance music for people who like indie rock and ambient, dance music for people who just need to shake their ass a bit. It’s driving and wonderful, and I PROMISE it won’t let you down.

Neon Indian – Psychic Chasms
Talk about trippy… Psychic Chasms is the epitome of psych-electro. It sounds as if it was recorded underwater on a tape recorder. Layered electronics, slight funk, quirky synths and dreamy pop all coalesce into a product greater than it’s parts. A joy to experience!

St. Vincent – Actor
Annie Clark is a quirky girl. She wears big white-framed sunglasses and looks awkward as all get-out on stage, yet endears herself to fans with her sweet rocker attitude, lyrics and killer delivery. This album ispristinely pop, and gloriously arranged. I was pleasantly surprised by this album and with each listen, she endears herself to me even more.

YACHT – See Mystery Lights
I wasn’t all about listening to the new YACHT. My impression of the band was that of sugary sweet nonsensical twee NW variety, which is not typically my cup of tea. See Mystery Lights, however, convinced me otherwise. Laced with vocoder pop, bouncy lollipop rock and floaty lyrics, their sound really seemed to change upon the label switchover to DFA. DFA’s voice and sound is so distinctive that it somehow influenced YACHT’s sound on this new album. DFA is one of my favorite labels by a long shot, so this new metamorphosis in sound agrees with me.