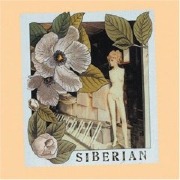 An imaginary friend of mine recently described Seattle band Siberian's six-song EP Hey Celestial! as her "latest crush." This statement created an inquisitive eyebrow, a tilt of the head, and possibly an itch on the back of my neck. A crush? That's a pretty strong statement, and a word I haven't heard associated with someone or something since middle school.

It only took one listen to Hey Celestial! to realize why my friend feels the way she does. Siberian's music is, well, handsome. The guitars saunter with confidence and Finn Parnell's vocals are some of the best I've heard in a long time. His voice is so crystal clear you'd almost think it would be better applied elsewhere, but lucky for him, and us, Siberian's guitars and drumming keep up. It leaves you wanting more; you want to know all about this band, what makes them tick. What they like. What they don't like. Before you even realize it, you have a big, fat crush on Siberian.

With songs about his own crushes (and lost loves), Parnell paints pictures we can all relate to. But the songs don't come off sounding like they're created by a bunch of whiners. They describe situations of heartbreak without the "poor me" attitude that usually comes along with it. Parnell realizes the relationship is over, the girl is gone, or that she just didn't live up to his standards, and he retells it as to explain or warn, not to complain.

The first note of "Soft Rains" may make your heart skip a beat, and will keep you captivated with its soaring Brit-pop sensibilities and hook-filled melodies. When the last note of "Talk to the Moon" ends, you're left with a feeling, a feeling you can't describe. Guys might say, "That's right, I should have handled it like that. Thanks, dude." And girls are just left with a big ol' crush.

What does having a crush on Siberian's Hey Celestial! mean? If the definition of a crush is a "passing infatuation" — passing being the key word — then do we assume that the crush will fade, that a year from now we'll have only vague memories of a band whose name we don't even remember that used to make our stomachs clench, our palms sweaty, or our cheeks flush? How can you ensure it's not just a passing infatuation?

Lucky you: Siberian's EP release show for Hey Celestial! is this Saturday, March 10th, at the Crocodile, with Youth Group. Go see them play live and (possibly) fall in love.