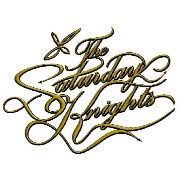 The press release rarely takes a form worth mentioning in music criticism. That's expected though, as they typically come as one-page bios with relevant calendar dates, folded neatly inside the jewel case. Occasionally supplemental materials will be included, such as photocopies of past articles on the band in question, hoping to entice the reviewer to join the likes of other (perhaps admired) publications by covering the band. Props to The Saturday Knights, who sent a coloring book along with their debut on Light in the Attic Records.

A coloring book wouldn't warrant mentioning if it didn't so aptly complement this record, illustrating (pun very much intended) exactly the type of music within the accompanying jewel case.

The four songs on this demo have been passed around local radio and friends for some time now. Light in the Attic signed them, and releases it this coming week as a tease to what critics will likely deem a "highly-anticipated" full-length.

For a demo, everything comes out of the headphones surprisingly clean. Opener "Motorin'" begins with thumping drum-bass-guitar beats that build trampoline energy to launch into a melodic hip-hop delivery: "This weather's so cold I gotta carry a heater and drink a lot of cognac." Immediately expectations tumble down. Cognac? Really? This is classy urbanity. The next track "45" takes the honor of being the most already identifiable song of the four (thanks KEXP), taking full advantage of TSK's dancey-rock blend of hip-hop and Gang of Four-esque heavy riffs: exactly the genre-bending grace Seattle music is tending towards these days. Who doesn't love a song you can't help but dance to, especially when it's about dancing?

"Ass Kicker's Haircut" and "The Gospel" round out the demo after the hit-making "45." "Haircut" somehow pays homage to "Pour Some Sugar On Me" and "Kung Fu Fighting" simultaneously, while "The Gospel" is appropriately steeped in Southern country guitar riffs, becoming the song Kid Rock is still trying to write.

Mercury Sables, girls, Superman's haircut, cold winter wind that makes you look like a cockroach — these are the elements of TSK's wit. They should join the likes of Common Market and Blue Scholars nicely, championing a better hip-hop than the rest of the country. The countdown for the full-length release begins…