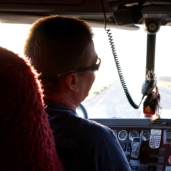 Big Rig (6/1 9:30p Egyptian; 6/2 3:15p Egyptian)
This populist doc portrait of modern America as seen through the eyes of long-haul truck drivers — people who know this country in ways you never will — is patriotic in the best sense. The team that brought us Scratch and Hype! have made a hip, insightful, slickly-executed road movie spanning 45 states and 21,000 miles, with first-rate graphic designs (by Tomorrow's Brightest Minds) and original music (by Canadian hip-hop artist Buck 65) that serve the truckers' stories beautifully.

Crazy Love (5/30 9:30p Pacific Place, 6/1 4:30p Pacific Place)
Truth can be stranger, and stupider, than fiction. Cases in point: the two subjects of this documentary about an obsession-triggered maiming case (ambulance-chasin' lawyer hires thugs to throw acid into ex-girlfriend's face post-breakup) that held New York in thrall in the late '50s, mid-'70s, and mid-'90s. I had trouble caring about the subjects for the first half-hour, and wished for a bit more narrative thrust to add much-needed momentum during the occasionally draggy proceedings, but the eccentric talking heads and the bizarro situation they created for themselves (not to mention a resulting series of media maelstroms) gets fun. And crazy for real.

Deutsch in Miniature shorts (6/3 1:45p SIFF Cinema)
I enjoyed most of these eight fiction shorts by German up-and-comers, especially the enigmatic psycho-gothic fairytale Wolf's Dream; the dreamy and elusive animated film Close Your Eyes and Do Not Breathe; See You at Home (quietly shocking story of a 15-year-old trick-turner and her momma facing up to some long-buried family secrets); and Wigald (about a troubled young man's humorously ill-timed suicide attempts).

Eagle vs. Shark (5/31 7p Neptune, 6/1 4p Neptune)
This irresistibly charming New Zealand quirkfest, a chronicle of the courtship of a socially-challenged fast food clerk and a grandeur-delusional computer store geek, could very well become the buzz flick of SIFF '07. Delightful story, full of quote-worthy awkward exchanges, peppered with fun stop-motion animation sequences and a shimmering soundtrack by The Phoenix Foundation. Inevitable comparisons to Napoleon Dynamite, Me and You and Everyone We Know, and the films of Wes Anderson will be well-earned by gifted first-time feature director Taika Waitiki.

The Fever of '57 (6/1 7p SIFF Cinema; 6/3 11a Neptune)
Far From Heaven-era Americans freaked out after Russia beat us into space with Sputnik I. This enthralling, well-researched and -produced film documents the aftermath in the year that followed: media-fueled nuclear paranoia, a crushing failure at the first launch of our own puny satellite, and Eisenhower getting screwed by the burgeoning military industrial complex. Don't worry if this all seems PBS-y at first — Peter Thomas' familiar narration sometimes had me wondering when the next pledge break would begin — because before you know it you will be riveted, and, if you're like me, you'll be calling your parents afterward to ask if they were sad when space-dog Laika died.

2 Days in Paris (6/2 8:30p Egyptian; 6/5 7p Lincoln Square)
I like Adam Goldberg, but up to now I've never considered him "hot". Julie Delpy's delightfully funny directorial debut, in which he plays her neurotic boyfriend (and in which he appears, briefly, with balloons tied to his schlong — no kidding), has changed all that. I shouldn't concentrate on Adam, though, or the balloons, because La Delpy is the real star here: in addition to starring and directing, she wrote, produced, edited, and scored the music for the film. The results of her efforts: whip-smart dialogue, Adam Goldberg naked, and irresistibly charming bits of Woody Allen-ish comedy.

The Art of Crying
Well-acted, morally ambiguous Danish tragicomedy about familial child abuse in '70s small-town Jutland. If you don't mind another depressing Scandinavian flick (there are plenty on the SIFF sked this year), then enjoy.

Outsourced
This middling-to-OK local-ish film falls squarely (and I do mean squarely) into the "crowd-pleaser" category, and if you enjoy seeing the Space Needle on screen I guess you could do worse. It's about a clueless Seattle call-center manager whose department is outsourced to Bombay. He's redeployed there, and oh wow it's a different world, and he's a jerk at first because he's so American, and the locals call him "Mr. Toad", because his name is Todd and I suppose Indians are just funny that way. The moral of the story is that Mr. Toad has a lot to learn. Well, so does this movie. If you're looking for some true insight on the subject, check out this documentary and leave Outsourced alone.

Rocket Science
Spellbound director Jeffry Blitz makes his narrative feature debut, and he's definitely seen him some Election, Gilmore Girls, and Rushmore. The first half of his zippy, brainy script, which sets up the dilemma of a New Jersey high-school stutterer convinced to join the debate team, is as promising and funny and (almost to a fault) quirky as our young hero. The second half, though, finds the characters searching in vain for the sharply-drawn creations they might have been. To quote one of them: "It's charming, no question — but is it persuasive?"

Satellites of Planet Cinema shorts
This nice mix of international non-fiction shorts about global environmental issues isn't exactly a thrill-a-minute, so grab a (fair-trade, shade-grown) coffee before you go. Highlights include the creepy but enlightening God Provides (about several New Orleans dwellers and their varied responses to Katrina) and Greetings from Death Valley (three stories about the titular area's inhabitants, in the wake of an unprecedented rainfall and flower burst there). And a tad too long (at 31 minutes), but still very interesting, is Chocolate Country, about an organic cacao cooperative in the Dominican Republic.

American Shopper
A misguided quasi-doc about a competition in "aisling", a sport (I guess) in which people in Missouri fancy up their wheely-carts (and themselves) to creatively complete routine supermarket shopping tasks. Promising premise, wi
th ultimately annoying, quirked-to-death execution.

Black Irish
Considering the weaknesses of what he has to work with, Michael Angarano (the kid who played Jack's son on Will and Grace) does fine in the role of a South Boston teen trying to save his disintegrating Irish-Catholic family. Blustery Brendan Gleeson, who apparently doesn't turn down any role, plays the drunk dad (wow, that's new) and Everwood's Emily Van Camp is good as the knocked-up sis. But, well-intentioned as it is, this is a dreadfully routine (and old fashioned in a bad way) coming-of-age story… as if we needed another one of those.

La Vie en Rose
Nice-looking biopic on legendary songstress Edith Piaf, the iconic songstress who made world-weary standards like "Je ne regrette rien" famous. I looked forward to what I'd heard was an amazing performance by Marion Cotillard as Piaf, but I didn't find one in this film: to me she looks like she's doing mime, especially during scenes of the chanteuse's sad final days. The film tells us that the great tragedies Piaf endured contributed to her great artistry, but (due in large part to Cotillard's exaggerated turn) it's not quite effective at showing us.

Running on Empty
This wannabe-creepy, aptly-titled German film about an insurance salesman's endless Autobahn outings is more annoying than enigmatic. It's also uneven, amateurish, and very forgettable. (Seriously. I hardly remember seeing it.)